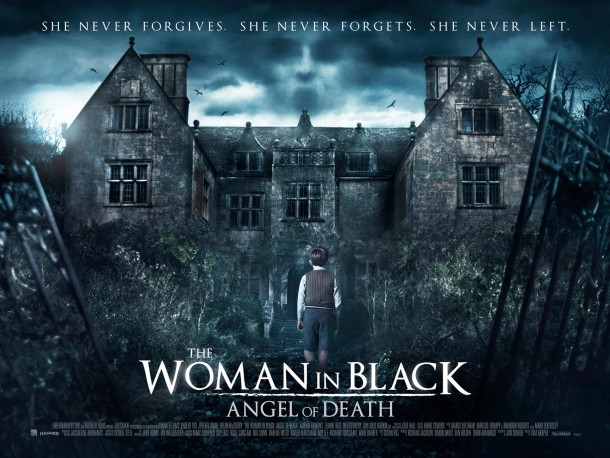 Writers: John Croker from the novel by Susan Hill

Tom Harper’s well-crafted adaptation of Susan Hill’s novel fails to inject any real fear into our hearts despite brave attempts and a sterling British cast of talent. True to the book, John Croker places his narrative in the midst of the Second World War and, in particular, the Blitz, a time when school children were being evacuated from London to the provinces. His select group of kiddies are led in their well-polished StartRight shoes to an abandoned mansion appropriately located in atmospheric marshland somewhere in East Anglia. But Eel Marsh House is already occupied dark presence far more disturbing than Germans Bombs. Placed in the care of a sensitive young student Eve (Phoebe Fox), who appears to have mental problems of her own, and a strict and uncompromising School Mistress, Jean Hogg (Helen McCrory), their new home is by no means the cosy bolthole they were hoping for.

Harper carefully contrives the cold and haunting ambience at Eel Marsh House with a series of appropriately ghoulish props and spooky sound effects that attempt to chill us to the bone at regular intervals. But gradually we become inured to the well-worn Gothic Horror tropes: creaking floorboards, howling winds and judiciously-placed shoes at the bottom of curtains. The marshy location of is wonderfully evocative and miserably melancholy and each characters’ fears are played upon to conjure up their own private Hell in on Earth here, evoking the presence of darkness embodied by the restless ghost of the house. Helen McCory produces another winning portrait of stiff-upper-lipped pragmatism as the hard-bitten School Mistress and Phoebe Fox, who starts as a gentle and calming presence for the children, gradually reveals her troubled side as she falls for Jeremy Irvine’s failed fighter pilot, Harry Burnstow, who have issues of his own to deal with. Irvine is convincing as the dashing young airman, broken and destroyed by the tough responsibilities of wartime leadership. But the story more or less ends there.

Ultimately Harper fails to bring any fresh spookiness to his film and the storyline has no real dramatic tension beyond the odd scary moment; the dramatic punch is derived more from the pathos and anguish we feel for the individuals and their plights and this does illicit a haunting feeling, in the true sense of the word. In fact, THE WOMAN IN BLACK works best as a tribute to those who suffered emotionally and mentally during wartime, as a contrast to the many stories of physical injuries and death that more often come to light in the War genre. As such, THE WOMAN IN BLACK is more of a psychological thriller than a true horror or ghost story.

That said, THE WOMAN IN BLACK is worth watching for its excellence performances from a solid British cast. A worthy tribute then to the Second World War and to the great British House of Hammer, the producer, being it’s first equel since Frankenstein and the Monster from Hell (1974).

ON GENERAL RELEASE FROM 1 JANUARY 2015