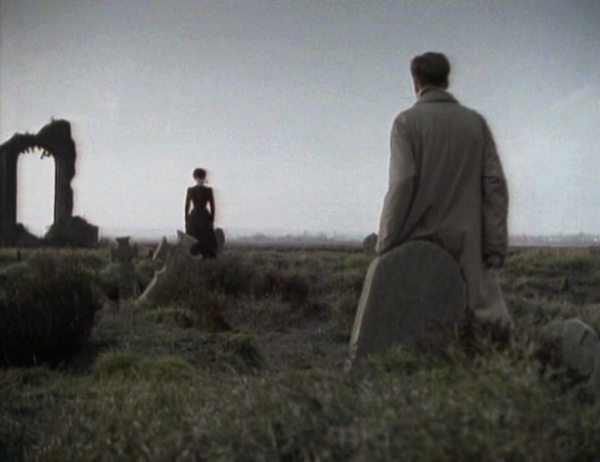 Originally made for TV and screening on Christmas Eve 1989, Herbert Wise directed this well made and effective thriller that takes us back to the Gothic tradition of storytelling in a Victorian ghost fantasy based on Susan Hill’s original 1983 novel. The Woman in Black follows the same formula as Bram Stoker’s Dracula, minus the blood-sucking Count who is replaced by an equally menacing woman in black, and the boxes of earth by a trunk full of evil trappings. 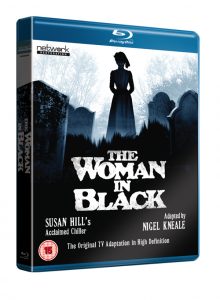 On the request of his crusty old boss young lawyer Arthur Kipps (Adrian Rawlins) travels from London to the North Eastern coastal town of Crythin Gifford, and out across the eerie salt marshes to attend the funeral of a friendless old widow, Alice Drablow. During the church service a be-hatted, black-robed woman appears to be watching Arthur Kidd from a distance and reappears on the marshes later that day, her face set in a ghastly grimace.

Wise’s film is chockfull of ghastly horror tropes. The wind moans and gulls screech as Kipps makes his way in the swirling mists to Eel Marsh House, only to discover a mournful legacy of untimely death and ghostly appearances in this miserable corner of Victorian England. A talented British cast includes Bernhard Hepton who plays a kindly professional Sam Toovey a sort of Devil’s advocate in explaining away the terrifying sounds and occurrences. The other locals are a sceptical bunch. And no one can explain how a ball comes to be bouncing and a little boy’s voice greets Kipps laughingly in a room that has apparently been locked since Alice’s death. Not to mention a recurring sound of a carriage crashing amid blood-curdling screams outside the house. All this has been recorded on a phonograph by Mrs Drablow herself. Meanwhile, Kipps seems to be losing his mind – not surprisingly. And things don’t improve when he returns to London, freaked out by the whole affair which continues to haunt him in the film’s shocking finale. Made in the late 1980s this reliable horror story  still has an undeniable kick thanks to Wise’s able direction. MT

https://youtu.be/wYfKkf_0Pnc
The worldwide Blu-ray debut of The Woman in Black is available exclusively from the Network website on 10 August
Copyright © 2022 Filmuforia