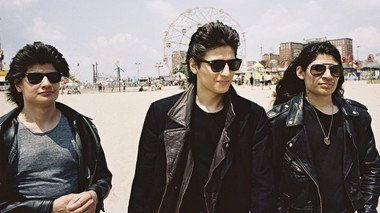 When the filmmaker Crystal Moselle was walking through New York’s East Village in 2010, she saw six boys running through the crowds. With their long hair and stunning features, they looked like a “lost tribe”. Moselle’s natural curiosity took over, and five years later her first feature documentary The Wolfpack, tells the amazing story of six brothers who literally escaped from home after being kept indoors like prisoners, by their parents.

The Wolfpack tells the story of the family that begina in 1989 when Susanne, a hippie from the Midwest, met the Peruvian musician and tour guide Oscar Angulo. They fell in love and moved around before settling in a Hare Krishna Centre in West Virginia. There, four children: Visnu (the oldest, and only daughter); Bhagavan and the twins Govinda and Narayana were born between1990 and 1995, all named after Indian Gods – Oscar wanted to emulate Krishna, who had ten children with each of his three spouses. Before long, Oscar again wanted to hit the road, to become a rock star. Mukanda was born in 1995 in LA, Krishna and Jagadisa in New York, after the family moved there in 1995, because “they had heard that there was cheap housing”. After the parents became aware of the rough environment they were living in, they shut themselves in the apartment with their children, just venturing out to get food or in case of medical emergencies. Oscar developed into a family tyrant and the children, who were home schooled by their mother, had to stay in the room he designated for them and could only leave with his permission. In January 2010, Mukanda left the apartment, wearing a Mike Myers mask. He was arrested and was treated in a psychiatric hospital. But in April, all his brothers followed him out onto the streets – Oscar’s reign was over.

When Moselle met the six kids, their only link to the outside world was via feature films: they had watched over 5000 of them, and had recreated props and costumes of their favourites, which ranged from horror movies and Pulp Fiction to Orson Welles. When the brothers saw a beach at Coney Island for the first time, they associated it with the desert of Lawrence of Arabia. Moselle filmed their many “firsts”: a visit to the cinema among them. Not surprisingly, all brothers now work in various capacities in the film industry, having been taught the basics by Moselle, who also opened their eyes to non-mainstream films.

The director describes her work with the teenage boys as difficult but rewarding, since their mood swings were not always easy to ride out. Their mother Susanne has also emancipated herself from her overbearing husband, having contacted her own mother for the first time in over twenty years. Moselle’s doc is well-paced and, judiciously, does not overstay its welcome, as she gradually reveals the after-effects of this “reign of terror” by a monstrous father.

The Wolfpack, which won the Sundance Prize for ‘Best Documentary’, is unique and original, the result of an accidental meeting, it is much more than just the story of an extraordinary family. Director Moselle describes the process, with a little sadness, as un-retrievable: “There will never be the same innocence again. Their minds and perception have already incorporated the outside world.” AS