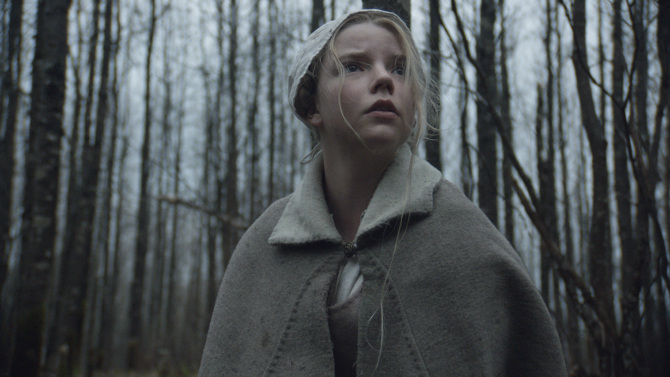 THE WITCH is a genuine horror story set in the Puritan heartlands of New England in the early part of the 17th century. Sumptuously-mounted with meticulous attention to detail and atmosphere, Robert Eggers’ rigorously-scripted indie debut successfully tells a tale of witchcraft suggested by the prevailing climate of religious hysteria and folkloric belief, that touches a family of devout Christian settlers.

In this indie curio, which scratches at the edges of mainstream horror, writer-director Eggers orchestrates the atmospheric setting, unnerving score, morose tone and fervent performances to create a film that is more laudable and impressive than particularly errifying or surprising. Precision framing and gorgeous period costumes also go to give THE WITCH serious arthouse appeal although it is unlikely to shock the usual horror crowd.

The story is set about fifty years before the Salem Witch Trails. It concerns a family who have been exiled from the mainstream Puritan church and close community over some religious difference of opinion. Vowing to make a go of things with a small farm deep in the forest, the father (Ralph Ineson) nevertheless seems ill-prepared for the task ahead with the birth of their latest child keeping the slightly histrionic mother (Kate Dickie) preoccupied with her small twins Mercy (Ellie Grainger) and Jonas (Lucas Dawson). Meanwhile young son Caleb (Harvey Scrimshaw) is capable of looking after the livestock with the help of his teenage sister, the open-faced and pleasant  Thomasin (Anya Taylor-Joy). But the baby suddenly disappears during a full moon, seemingly carried off by a red-cloaked stooping figure who is later seen anointing her decrepit naked body in blood and gore.

To put these events in context, the 17th century was still a dangerous time to live outside established community settlements. Native Indians roamed New England and folklore created a climate of suspicion and fear. Infant mortality was extremely high, but the mother is unable to overcome her grief as it spills over affecting the wellbeing of the family. Their situation deteriorates as household items go missing, the goat sickens and the weather turns inclement and food supplies dwindle. To help the disconsolate father, Caleb and Kate venture into the forest to look for food with the rifle. All they find is a strange rabbit who evades their bullets. The pair become separated and Caleb finds himself outside a cottage where a tousled hair siren beckons him in. At this point the narrative swerves away from the witches and focuses on the family as it starts to implode. Threats of violence are bandied about and the mother starts to point the finger of blame at Thomasin, accusing her of witchcraft.

Eggers’ script has plenty of old English personal pronouns flying around and the religious fervour steadily ignites with some remarkable outbursts from a superb cast who embrace the tragic events with escalating hysteria in scenes of mounting melodrama. To to his credit, Eggers keep things plausible :THE WITCH could serve as a timely metaphor for the state of the family in the 21st century. MT