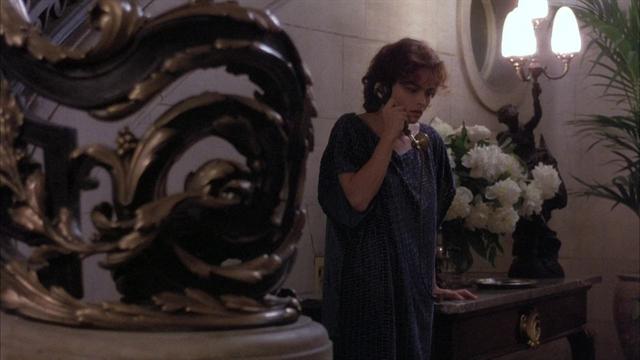 In 1910 London, Kate Croy (Helena Bonham Carter) is being controlled by her aunt Maude (Charlotte Rampling) over the choice of a husband – he must be very rich. Kate is seeing a poor journalist Merton Densher (Linus Roache). Realising that she’ll be disinherited, Kate temporarily suspends the relationship when she meets her aunt’s choice, Lord Mark (Alex Jennings) and also a wealthy American heiress Milly. Theale (Alison Elliot). Milly is terminally ill. Kate persuades Merton to woo Milly so that her money will be left him in her will.

The job of adapting Henry James is fraught with problems. James (like Proust) is essentially un-filmable. James’s memorable characters are impeccably rounded in their psychology. Their thoughts take central stage over their actions. James’s dense prose style, with its great interiority, defeats a scriptwriter. Things have to be simplified. Scriptwriter Hossein Amini’s solution for The Wings of the Dove is to concentrate on sub-plots and audaciously invent scenes. In interviews he has said, “I couldn’t help but see it in terms of a film-noir, a story of triangles, conspiracies and deceptions.”

There are many memorable scenes in this remarkable film. But to carefully delineate them would be to rob you of their acute emotional surprise. Instead here are two quotes. “We shall never be as we are.” And simply “I love you…Both of you” Such lines could reek of romantic cliché. But the first is sadly spoken in a bedroom sex scene where Kate and Merton sense their guilt over scheming to get Milly’s fortune. The second line has a heartbreaking intensity in the scene where the dying Milly questions Merton, after she has learnt from Lord Mark the nature of their plan.

The Wings of the Dove has minimal dialogue, pauses, silences, body language and intensity of looks – searching eyes and faces suggesting febrile thoughts. The acting of its three leads is of the highest order. Helena Bonham Carter is superb as the minx-like Kate. She’s on record as having said that this strong woman role was for her the Bette Davis part. A more appropriate actress to cite would be Barbara Stanwyck in Double Indemnity. Alison Elliot does the impossible and creates a genuinely good person. She’s never a naïve American woman but a warm and vibrant character. It’s such a brilliant and wonderfully affecting performance. Linus Roach’s acting is maybe a notch down from the women, but he is still very convincing as the serious minded journalist.

There are only two self–conscious flaws in this almost great drama. The first is where you think the proper ending of the film should have been. I won’t say but leave you too decide. And secondly the film has too much music which drenches its first act.

Otherwise The Wings of the Dove has gorgeous sets, costumes and photography. The moneyed societies of both London and Venice positively glow with self-assurance. Aside from Ian Softley’s sensitive direction, the true joy of The Wings of the Dove is the brilliant screenplay and the subtlety of its acting. I wonder what Henry James, the continually failed playwright of staged versions of his own novels, would have said about filming his interiors? Alan Price