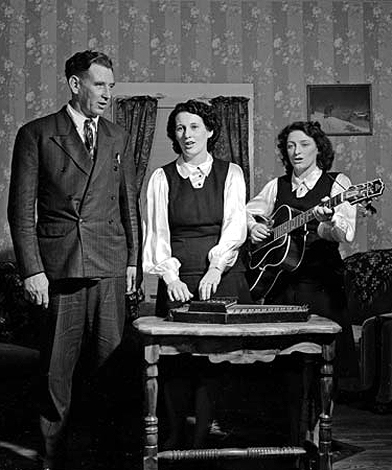 In 1917 A.P. Carter was selling fruit and living a meagre life in the mountains of Virginia, when he heard Sara Dougherty sing “Engine 143”, a popular song about an engine driver who got himself killed. So begins Beth  Harrington’s THE WINDING STREAM, a documentary about the founders of Country music, the Carter family, and their most famous member (by marriage), Johnny Cash. A.P. Carter married the 16 year old Sara, and together with Sara’s cousin, Maybelle, he founded a family dynasty, which is still alive today, long after Sara left her husband, who was obviously not very caring. (Even though she still worked with him and Maybelle). Perhaps not that many people have heard of A.P. Carter, Sara and Maybelle, the original trio, but everyone knows Johnny Cash, Maybelle’s son in law. Harrington interviewed Cash three weeks before he died. He tells the story how he met June, backstage at the Grand Old Opry in 1956, where she was singing with her sisters Helen and Anita, and her mother Maybelle. It turns out, that Johnny was even than every bit of a rascal, and Maybelle had her doubts about him being the right man for her daughter – even though she had no reservations about his talent. Harrington tells the story chronological, and with great care for details. Apart from the music, we learn a lot of the early days in the music business of the 20s, about the roles of women and the unglamorous life of the music pioneers. And when we hear the third generation Carters still going strong on stage today, we start to appreciate the significance of the title, “Winding Streams” and the long, hard road from the mountains of Virginia to the glamour of Nashville, Tennessee.