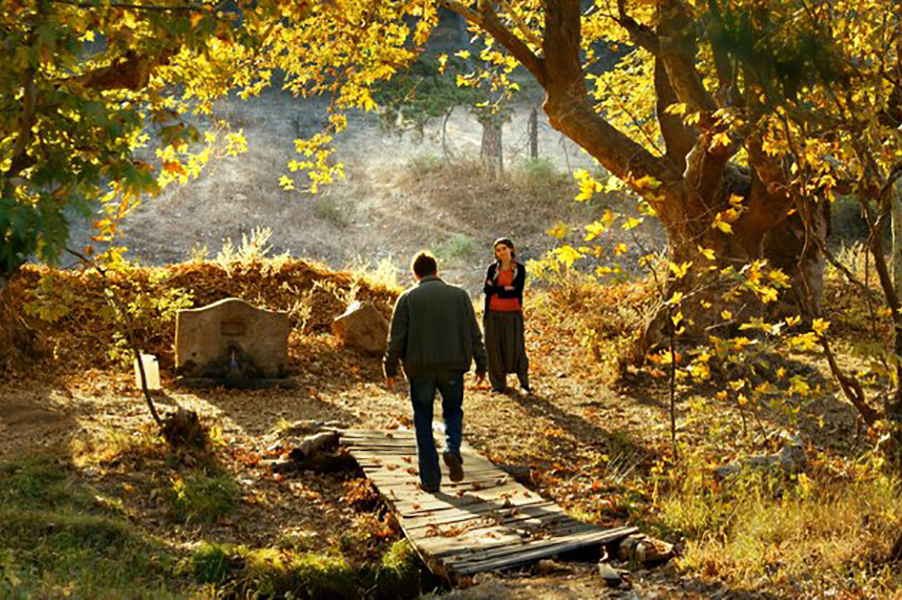 For some the countryside is a retreat where hopes and dreams merge with solitude and recovery. For a father and a son in THE WILD PEAR TREE the sweeping landscapes of Western Turkey’s Marmara region are a place of shattered hopes and despair.

Nuri Bilge Ceylan imbues his melancholy mood piece with the usual visual richness in a slow-burning saga that revolves around aspiring writer Sinan (Aydin Dogu Demirkol) who returns from army service to his native village to raise the money to publish his first book. But his father’s debts catch up with him and put a stop to his personal aspirations. Running at a little over three hours, this long-awaited follow to Winter Sleep and Once Upon a Time in Anatolia takes the customary languorous and discursive pace. The wide screen splendour also makes time for quietly intimate moments but there is no melodrama or ‘major developments’ in a film that plays out contemplatively as the story naturally unfolds.

Sinan is not particularly glad to be back home in the small rural village of Çan, where he holds the community in disdain. But his father Idris’ gambling has spiralled out of control causing his mother and sister to do without, so Sinan starts to do the rounds of friends and family in search of finance for his literary endeavour.

Contrary to the title, a wild pear tree never features in the film, and there is no love lost between Sinan and his father Idris, their relationship slowly deteriorating for obvious reasons. There is a sense of longing for urban civilisation, and while the film takes much delight in the convincingly creditable characterisations and conversation pieces, which are quietly enjoyable, often philosophical (even a little bit over talky at times), it’s clear that Sinan is no more enamoured with this rural idyll than when he reluctantly arrived.

Ceylan returns to the evergreen signature themes that have been present in his work since the beginning and have gained him a reputation and a strong following, along with his elegantly crafted widescreen style and well-rounded character studies. And there is always a touch of dry wit to lighten proceedings while grounding them in community, local politics, moral and ethical issues and family concerns.

In some ways, his latest is an expansion of his FIPRESCI and Golden Tulip winner Clouds of May (1999) and has the same ripe quality of visual sumptuousness throughout. Dermirkol plays Sinan as a vaguely unsympathetic character whose ennui with his family and rural life simply demonstrates an ardent need to get on with his aspirations rather than indicating a deeply flawed personality. But maybe they are one in the same. Ceylan eyes his antihero in a detached and observational way that makes him really convincing as a representative of his generation. In contrast to the self-sacrificing heroes of the early 1900s, Sinan is a full-fledged 21st century man. MT