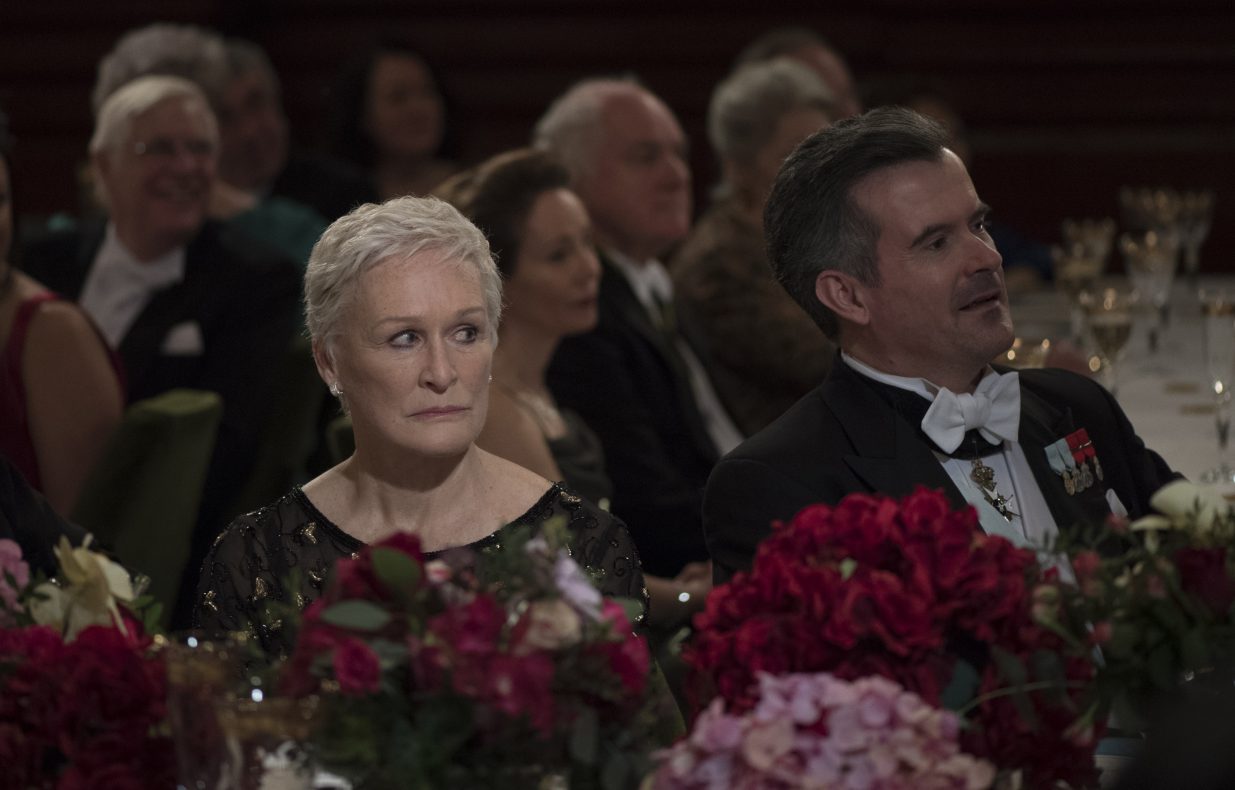 We first meet Joan (Close) and Joe Castleman (Pryce) in 1992 – having just had sex – celebrating his winning the Nobel Prize for literature, they are rolling around in bed like teenagers. It all seems too good to be true – and so it turns out. Their daughter Susannah (Regan) will soon give birth to a son David (Irons) who will fail to outshine his father, in his own writing career. On the flight to Stockholm for the award ceremony, a nagging little voice belonging to journalist/writer Nathaniel Bone (Slater) whispers in his ear, suggesting the great man may have not written the novels by himself. Flashbacks into the life of young Joan (Starke) and Joe (Lloyd) confirm the truth: it was Joan who wrote the whole oeuvre, but in the 1960’s ‘it was easier’ to launch a career as a white, male Jewish genius.

In Stockholm Joe again puts on his charm, trying to seduce young photographer Linnea (Korlof), who could be his grand-daughter. Joan, has seen it all and doesn’t bat an eyelid, reminding him to take his blood pressure tablet, whilst she’s having a long talk with Bone, who’s own research threatens to spill the beans. Joe pays homage to her in a very conventional way in his acceptance speech, ignoring the script the two had agreed between themselves. So naturally, his wife is not amused and leaves  him, setting in motion a dramatic finale where the crux of the matter is once again swept under the carpet.

The topic of female spouses “helping” their husbands to turn out classics is nothing new, Count Tolstoy being a case in point. And closer to home, T.S. Elliot and his wife Vivienne is another example: Elliot later ‘disposed of’ her into a mental hospital, where she died unrecognised. But Runge is eager to show how complicit Joan was in the act of fraud – totally forgetting that this compliance was/is often the only way for women to survive and thrive in society. The female counterpart has always had to carry a huge part of the guilt, be it rape or literary fraud. Whilst the settings of the ‘60s flashbacks are spot on, the endgame in the posh hotel world is false because it deflects from the real conflict. DoP Ulf Brantas tries to outdo Italian cameramen of the 60s, but only succeeds in rehashing the classics. Glenn Close struggles all the time to find a voice, but is submerged by a script which gives her no chance to make her point. A wasted opportunity but an enjoyable romp. MT

ON GENERAL RELASE FROM 28 SEPTEMBER 2018