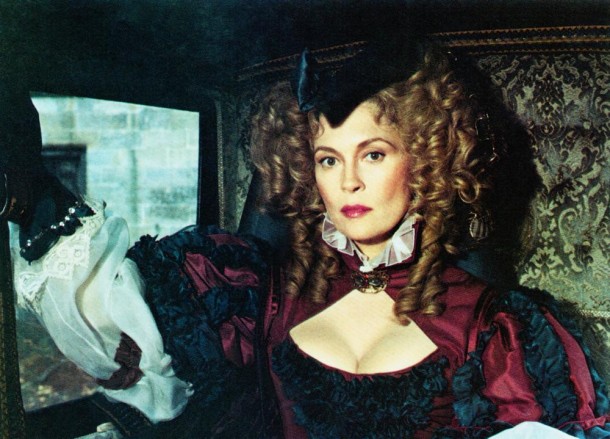 Funded by producers Menahem Golan and Yoram Globus Death Wish director Michael Winner turns Magdalen King Hall’s THE WICKED LADY into a witty and watchable bodice-ripper despite an unusually lacklustre turn from Faye Dunaway as the lady in question.

In the leading role, originally played Margaret Lockwood in the better known but less light-hearted 1945 version, Dunaway plays a scheming siren who seduces her sister’s wealthy fiancé Sir Roger Skelton (Elliott) and tiring of him moves on to Oliver Tobias, while turning her hand tohighway robbery until her heart is finally captured by Alan Bates’ roguish charms.

A stellar British support cast gets rather short shrift in this Restoration romp where Denholm Elliott is sadly underused as Lady Barbara’s maligned husband; Sir John Gielgud, as the Skelton family’s butler. But Glynis Barber and Oliver Tobias strip off for a fireside fondle as lusty lovers given the run around as Lady Skelton cuts a swathe through the all the desirable males. Shimmering in a range of gorgeous gowns she plays it straight down the middle with a limited emotional output showing that her heart os clearly made of stone.

Firmly tongue in cheek, Winner’s script stays close to the original Leslie Arliss 1945 version, injecting a vein of louche repartee that sends up the original novel and never takes itself too seriously. Sit back and enjoy Jack Cardiff’s resplendent camerawork capturing the elegant 17th-century interiors and blooming English countryside where Alan Bates and Denholm Elliott give it all they’ve got in the feisty finale.MT