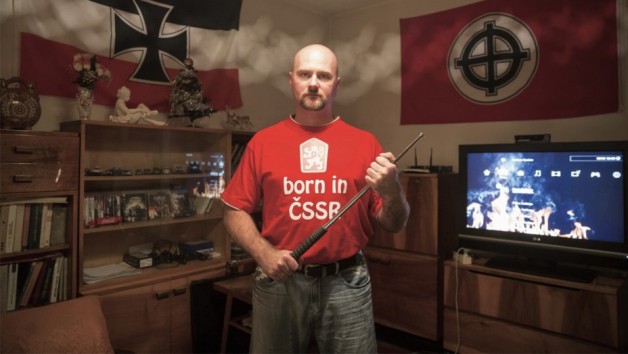 Czech documentarian Vit Klusak turns his camera on white racist supremacy for his latest documentary which is shot through with the same dark humour as his debut Czech Dream, although this shocking expose leaves a bitter taste in the mouth despite its hilarious moments.

In the Czech Republic lives Daliborek, a pasty-faced larded lump of a man who, at 37, still lives with his mother, abusing her verbally and occasionally even physically, asking her to “stand to attention” in front of his friends.

Although Daliborek raises some laughs with his outlandish behaviour throughout, we titter in sheer disbelief rather than out of genuine pleasure, a feeling of sickness replacing any genuine mirth, in the aftermath to this alarming film. Klusak is entirely dispassionate about his subject, who is clearly more of a super-sized bully than an outright threat. But when Daliborek joins his like-minded friends, it’s easy to see how any form of extremism can quickly get out of hand and threaten democracy, or lead to mass violence –  genocide even – as we have learnt from the past.

Giving full rein to this nutter on the big screen serves to make us in no doubt whatsoever about these characters who exist in society and are to be pitied and demeaned rather than feared, as long as they live securely in within their families; although the startling epilogue to the doc poses more concern.

Daliborek regularly rants on youtube with tuneless misogynist and sexually explicit songs that garner hundreds of views per clip. Meanwhile, his vampish mother Vera is in denial as she desperately dates online and posts fluffy photoshopped pictures of herself on Facebook. As the film gets underway, she has formed a relationship with another racist man. Daliborek’s bedroom is a sight for sore eyes: Neo-Nazi flags deck the walls along with supremacist crosses. But when he meets (an equally overweight) girl, he totally respects her prudishness and refusal to have sex, even after the couple have dated for several months. Clearly he’s no psychopath.

You have to pinch yourself at times while watching this bracingly rampant stuff; it could easily be a well-scripted spoof. And liberals and minorities will be calm in the knowledge that Daliborek’s life is actually rather sad and monotonous. He doesn’t even get to have sex with his girlfriend.

Eventually Vera’s boyfriend and Daliborek start to bond during their karate afternoons in the nearby park, both men demonstrating their tough-guy moves chopping bricks – or not. This is certainly thought-provoking stuff and absolutely compelling to watch, although Klusak never really gets to the bottom of why Daliborek has become so outrageous, given his humdrum life in a bland provincial village with hardly any crime, or immigrant population. He does not even bother to vote in the local elections. So clearly, he must have reached his point of view out of sheer boredom and lack of direction.

The final ‘epilogue’ is tragic and really raises far more questions than it attempts to answer. During a family visit to Auschwitz, Daliborek tries to go out on a limb and deny the holocaust in front of a survivor, who has just given frank and open talk about her experiences. MT