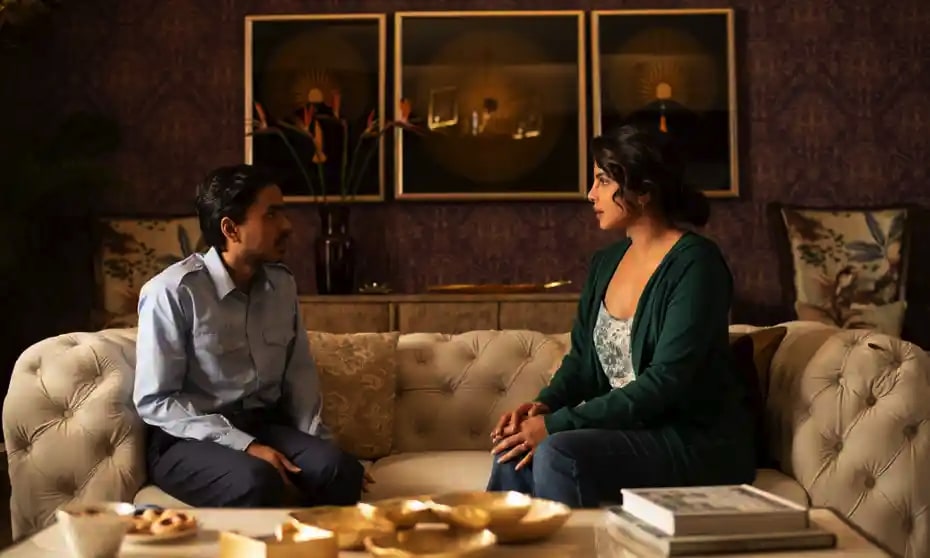 This stylish snapshot of modern india glints with cynism and snarky humour its sharp social contrasts bared like the titular tiger’s teeth.

Netflix has the pleasure of hosting this little brute from 99 Homes’ Ramin Bahrani, adapting Aravind Adiga’s 2008 Booker Prize-winning novel that sees a poor guy from rural India rise from servitude to success as a global entrepreneur in Bangalore. The wider world opens up through his experiences along the way as a driver for the spoilt and privileged son of a corrupt local industrialist.

The first person voiceover brings to mind Slumdog Millionnaire but that’s where the similarities end – this is a much edgier beast powered forward by the appealing character of young Delhi tea-maker Balram (Adarsh Gourav), who one day lands a job far beyond village life, ferrying round US educated Ashok (Rajkummar Rao) and his liberated wife Pinky (Chopra). This lowly gig leads Balram to a rocky but glittering future by keeping his nose to the grindstone and his eyes to the stars.

Bahrani’s focus is very much on bumpy road ahead as his hero Balram navigates potholes in this journey of self-awareness and nouse-gathering. And this angel-faced servant soon has to toughen up if he’s to survive and thrive. Rather like Balzac’s rags to riches hero Eugene de Rastignac, Balram is a socially challenged but highly intelligent young ingenue equipped with guile, charisma and a low cunning as he wades through a morass of corruption, deceit and betrayal of India’s myriad social divide. Adarsh Gourav is entertaining to watch as he masters Balham’s dextrous human complexities, ducking and diving and wising up through the exotic ever-challenging landscape that lies before him.

Bahrani shows a real understanding of the delicate social structures at play, conjuring up the dark continent convincingly with its intoxicating chemistry of sights, sounds and contemporary social scenery which is magically conveyed by Paolo Carnera’s dazzling camerawork and set to an original soundscape from Oscar-tipped Danny Bensi and Saunder Juriaans. MT