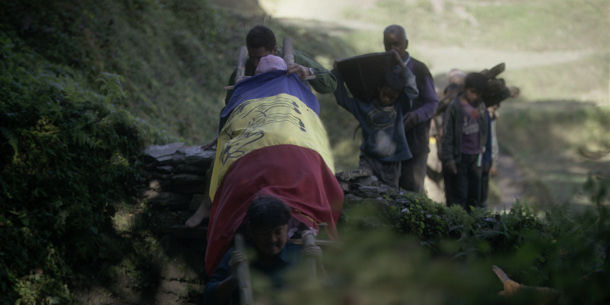 Deepak Rauniyar brings the only Nepalese film to Venice 2016. A delicately drawn and poignant paean to peace after a decade of civil war between Maoists and royalists (1996-2006), it takes place in the foothills of the Himalayas where nearly all the adult males have been wiped out leaving the only the weakened elders.

This is not a political film but a subtle and often intimate intergenerational cinéma vérité style parable where politics often rears its ugly head disrupting the characters’ relationships. Co-written by Rauniyar and David Barker, it takes place in the village of Nepaltra where the sudden death of the former mayor Chitra (Prakash Ghimire), poses a tricky problem: how to remove his body from the house to start the tortuous process towards the riverside where it is to be cremated according to strict traditions governing who can come into contact with the cadaver. There are no strong men to help.

Luckily, Durga (Asha Magrati) is a clever and strong-minded villager who appeals to ex-husband Chandra to make the journey from Katmandu to give his assistance, along with his brother. The long-standing rivalry between Chandra (Dayahang Rai – a famous star in his native Nepal) and his brother Suraj (Rabindra Singh Baniva) adds grist to the dramatic mill along with the fact that Durga’s young daughter Pooja (Sumi Malla) is neither his biological daughter, not that of his sibling. The subsequent journey downhill gives rise to some magnificent local views, all shot on the widescreen, as we get know the colourful local characters amongst whom is 10-year-old porter Badri (Amrit Pariyar), who has known nothing but war, and Deepak Chhetri’s priest who is the feisty star of the film, determined at any price to to resist change, in this thoughtful and deeply resonant arthouse drama. MT