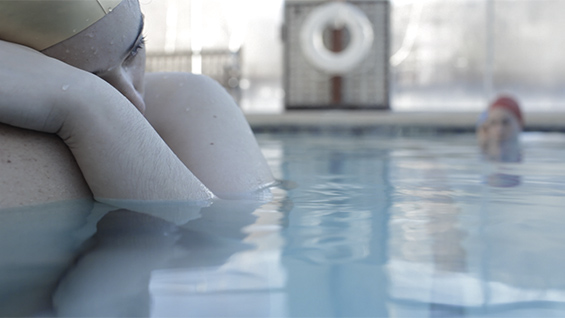 Portuguese law graduate and current Master of Fine Arts in Filmmaking student at New York University’s Tisch School of the Arts, Diogo Costa Amarante demonstrates a fine compositional eye and tonal command in THE WHITE ROSES (AS ROSAS BRANCAS). The 20-minute short premiered at the Berlinale earlier this year and screened as part of the International Shorts Competition at the 11th IndieLisboa last week.

Opening with six teenage lasses dancing in a basketball court to distant but audible Martin Luther King soundbites, this US-Portuguese co-production proceeds in an associational manner: from the apparently surreal sound of ‘The Logical Song’ being danced to with such choreographed abandon, Amarante cuts to two girls lying down on a snow-covered farm. “Yesterday,” one of them says with deadpan negligibility, “I had a strange dream.” Just as she says it, with perfect timing, a flock of sheep go running by.

The exact meaning of such juxtapositions is unclear. Indeed, so disparate are these individually distinctive set-ups that THE WHITE ROSES lends itself quite happily to the kind of recipe-style synopsis that seems to have taken over festival catalogues like some insidious fad. With one eye on the difficulties of translation, beware the write-up that lists a film’s ingredients with confident neutrality before making a summarising gesture that explains why such elements amount to an excellently rendered theme.

The theme of THE WHITE ROSES, as it turns out, involves grief and loss, as one family – a father and his three children – looks to recover from the death of its loving matriarch. The crux of the matter is that the son, Gabriel, is looking to replace his mother by becoming her. As legitimate as all grieving processes are, this one has naturally unsettled the family unit.

Amarante’s preferred method is not so much symbolism as it is a visually rich succession of tone-evoking non-sequiturs that only occasionally takes a breather to give a little more narrative info. Boasting precise, gorgeous framing from cinematographer Federico Cesca, THE WHITE ROSES is – like so many shorts of its ilk – symptomatic of a filmmaking culture that emphasises the irrational, the gut feeling, the poetry of the image – or some other such quality. To emphasise the visual is a filmmaker’s prerogative, of course, but she or he must forgive us if we sit unmoved by the routine narrative strategies employed alongside it.

SCREENED DURING INDIELISBOA WHICH RUNS UNTIL 4TH MAY 2014, IN LISBON, PORTUGAL