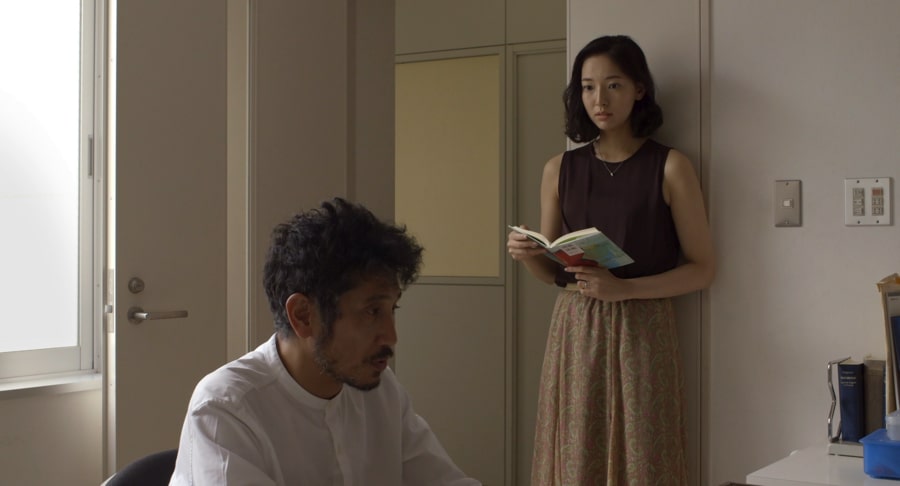 The Wheel of Fantasy and Fortune | Guzen to Sozo

In chapter One, ‘Magic – Or Something Less Assuring’, two actresses, Meiko (Furukawa) and Tsugumi (Mori) drive home in a taxi after a shoot. Tsugumi tells Meiko all about a guy called Kazu (Nakajiima). She’s has clearly fallen in love. She also tells Meiko about his emotional trauma with an ex who cheated on him. Little does Tsugumi know that her friend Meiko is the woman in question. And once Tsugumi has got out of the taxi, Meiko goes straight round to Kazu’s office. Clearly things are not over for the couple. When Tsugumi and Kazu meet up in a cafe Meiko casually walks by the window. She is invited in, and the audience are invited to choose one of two alternative endings.

Episode Two – Door Wide Open – follows a humiliated college student, Sasaki (Kei) take revenge on his professor, Segawa (Shibukawa) with the help of his lover Nao (Hyunri) also a ex-student of the professor, and  now married with a daughter. Together they hatch a plan that sees Nao walking into Segawe’s office at the university with the aim of securing incriminating evidence of the professor’s unseemly behaviour. She reads him a pornographic excerpt from his prizewinning novel, but despite his reluctance to be drawn into the trap the poor man ends up becoming involved in a salacious encounter, Nao taping the incident and sending the evidence to Segawe’s university mail address, losing hum his job. Nao and Sasaki meet by accident five years later, and all has changed.

The third – Once Again – is by far the most intriguing segment that sees three characters involved in a lose love triangle originally meeting in college and going on to live their lives before becoming involved again in a drama of mixed identities and role play. Natsuko Higuchi (Kawei) meets up with her class of 1998. She is obviously an outsider, hardly bothering to socialise. Next day in Tokyo she meets Aya Kobayashi (Urabe). Natsuko is convinced Aya is really her ex- Mika Yulli, a girl she wanted to spend her life with, but who decided to marry a man. It takes Aya ages to convince Natsuko she is not Yulli. Aya is married with two children before the virus Xeron ruined electronic communications, and sent the world back to mailed post and telegrams. Aya is helpless, before she decides to participate in a role play in which she plays Yulli. Natsuko tells ‘Yulli’ how much she was hurt by her decision to leave her. Now Natsuko regrets the past, she has never fallen in love again. After the women re-bond Aya agrees to play the role of a girl in her class, Nozumi, a boyish girl, on whom Aya had a crush. Aya and Natsuko part as friends, having created a romantic past.

The is an elegantly crafted romantic drama full of twists and turns, a mature masterpiece, with Hamaguchi effortlessly playing all emotional nuances in a satisfying trilogy of different passionate styles. Apart from being a master class in narrative structuring, Wheel is also full of ambiguity and ambivalence: human emotions being shown as destructive as well as healing. Outstanding. AS