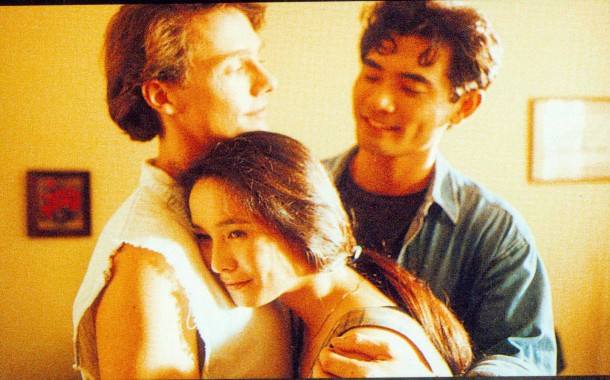 Themes of duty and family were to shape Ang Lee’s work and his debut PUSHING HANDS is very much a domestic drama. Taiwanese Tai Master (Sihung Lung) struggles to adapt to a new life in the conflicted American household of his only son Alex, his Jewish wife Marsha, and their little boy. Co-written with regular collaborator James Schamus and starring Sihung Lung (Crouching Tiger, Eat Drink Man Woman) and veteran Lai Wang, this first feature’s only flaw is a rather clunky support cast.

Sihung Lung plays Mr Chu, an intuitive and affable old man at odds with his neurotic daughter in law, who subconsciously blames him for her ‘writer’s block’. Our sympathies lie more with Mr Chu and his amusing spiritual take on life. During the day, he teaches Tai Chi in a local Taiwanese community centre where he strikes up a tentative rapport with Mrs Chen (Lai Wang), a widow from Taiwan who teaches cookery.

This gentle often humorous drama pokes fun at national idiosyncrasies as well as cultural differences, showing the Taiwanese to be a feisty and fiercely loyal bunch. Sihung Lung gives a nuanced and thoughtful performance as an ageing father who still holds traditional values, making it hard to express himself romantically, despite his spiritual awareness.

Apart from their lacklustre performances as unappealing characters, Martha and Alex are a mismatched couple, both volatile and lacking in any real chemistry in contrast to the more successful pairing of Mr Chu and Mrs Chen who steal the show especially towards end where the tone shifts to melodrama in a devastating and unexpected finale.

Despite its pitfalls, PUSHING HANDS is a well-crafted and worthwhile start to Ang Lee’s success as a filmmaker. MT

THE WEDDING BANQUET returns once again to family territory with a slick comedy with less heart and soul than Pushing Hands but entertaining nonetheless, as Ang Lee’s growing confidence ensures a smoother feel. A gay landlord’s marriage of convenience to one of his female tenants gets into Queer Street when her parents discover the ploy. As this is not a gay outing in the strict sense of the word, its appeal will garner more mainstream appeal.

Sihung Lung is once again the star turn, as wise head of a Taiwanese family, Mr Gao. Delighted that his son Wai-tung (Winston Chao) is finally going to carry on the family line (after years of nagging), he makes a surprise visit to NYC with his wife to meet the delightful Wei-Wei (May Chin) expecting a full scale wedding and not the registry office slot, planned for the following afternoon, as the Wai-tung’s gay lover Simon (Mitchell Lichtenstein) lurks sympathetically in the background as Best Man.

Plenty of Meet the Fockers-style awkwardness ensues during the hastily thrown together wedding banquet but proceedings take turn for the worse when, in a bizarre bi-sexual twist, Wai-tung makes Wei-Wei pregnant on their wedding night. This is a light-hearted affair with the thrust on comedy rather than character development. That said the ensemble cast give decent performances and Ang Lee is seen in cameo with the line “You’re witnessing the result of 5,000 years of sexual repression”. MT

The third and most accomplished film in this Box trilogy is Lee’s 1994 outing EAT DRINK, MAN WOMAN based on the first lines of the traditional chinese Book of Rites “The things which men greatly desire are comprehended in meat and drink and sexual pleasures”, Eat Drink Man Woman is a gentle parable of domestic unhappiness. Mr. Chu (Lung), a famous chef and longterm widower, has three daughters who are frustrated in many different ways. Chu is always dissatisfied with his lot and, perhaps symbolically, has lost his taste buds with his cooking leaving much to be desired. Jia-Chien (Wu) is an airline executive, Jia-Jen (Mei-Yang), the oldest, is a prim school teacher who is disappointed in life after an unhappy love affair, and like her father, unable to make a new start. Jia-Ning (Wang), the youngest, is the only sibling able to express her unhappiness with her lot and the stifling family atmosphere. In a similar vein to Rohmer’s ‘Moral Tales”, there is a philosophical undercurrent and also, a somehow slightly false happy-ending. But Eat Drink Man Woman is hugely entertaining; the love life of the sisters wreaking havoc with the sleeping arrangements of the household. AS