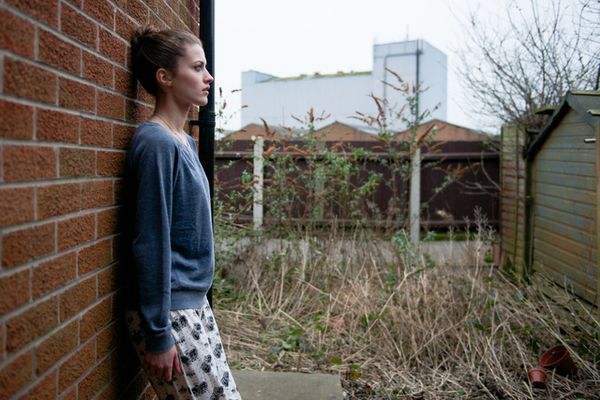 Helen Walsh is a novelist turned filmmaker Helen Walsh whose debut feature takes place in the grim post-industrial landscape of Birkenhead’s council estates in Cheshire. Ultrarealistic in tone and supremely acted by the two female teenagers, Walsh’ script plays with underlying sexual motives, before a dramatic final rush destroys much of the intricacies that preceed.

In their rundown council flat, sixteen year-old Lauren (McQueen) has to look after her two brothers: the adult, near catatonic Andy (Barr) and the schoolboy Jerome (Chadwick). Lauren befriends Rachel (Ellis), who lives in a posh gated complex. It is unclear why Rachel showers Lauren with gifts as their relationship seems impenetrable and enigmatic. When Lauren learns that their violent father will soon be released from prison, she panics and has asks middle-aged pawnbroker/debt collector Mikey (Lord) for help. The would-be sugar-daddy exploits her sexually, but when Laura discovers that their father is to remain incarcerated, she turns to the her neighbour, the friendly army cadet Kieran (Ainsworth). With the audience still wondering about the Lauren/Rachel relationship, Walsh decides to deny all the malevolence, which has festered throughout the film, opting for a sudden and dramatic finale.

Despite this botched ending, THE VIOLATORS suffers from its ambiguous storyline where too many questions remain unanswered. Eerie images by first time DoP Tobin Jones always promise much more than the narrative delivers. A shroud of tension hovers over the proceedings, but the atmosphere of decay and alienation is by far the strongest part of this promising first feature – apart from the teenage leads, who are impressive in acting out the subtle nuances of their individual emotional issues. Perversely, the novelist in Walsh actually lets down the filmmaker with her script, creating dark, forlorn images which fail to be matched by convincing dramatic arc. AS