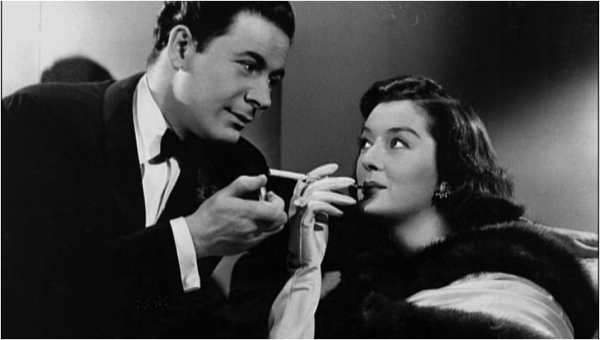 This is certainly a collector’s item: The Velvet Touch was a one hit wonder from Jack Gage (1912-1989). He spent the rest of his career in TV (Jane Eyre 1952), having started as a dialogue coach in Hollywood where he met Rosalind Russell, during the shooting of Mourning becomes Electra, persuading her to star in The Velvet Touch, based on script by Leo Rosten and Walter Reilly.

Valerie Stanton (Russell) is a comedy actress Broadway where her lover the impresario Gordon Danning (Ames) made her a star. But when she falls for British architect Michael Morrell (Genn), who encourages her to play the title role in Hedda Gabler, fostering her dreams of succeeding on the stage. But Danning won’t let Valerie go, and during an angry scene in her changing room, she accidentally kills him with one of her award trophies. Earlier in the day Danning had had a tiff with his ex Marian Webster (Trevor), who is now the number one suspect – or is the police detective Captain Danbury just playing a clever game to flush out the real killer?. Valerie is taken to hospital in shock while Captain Danbury (Greenstreet) interrogates everyone who had been there the night before in theatre. After visiting Valerie, Marian takes her own life. But on the night of the premiere of Hedda Gabler, the story takes an unexpected turn and one that reveals Valerie’s true colours.

Sidney Greenstreet steals the show: his presence alone is enough for him to dominate the proceedings. We are never quite sure if he knows the truth from the beginning, toying with Valerie like a cat with a mouse. DoP Joseph Walker (His Girl Friday, Only Angels have Wings) uses the theatre as a brilliant background for intricate black-and-white images, and  Russell manages some emotional depths, Gage directing with great flair. The Velvet Touch is a sparkling gem, and certainly one of the more memorable noir-films of the genre’s hayday. AS