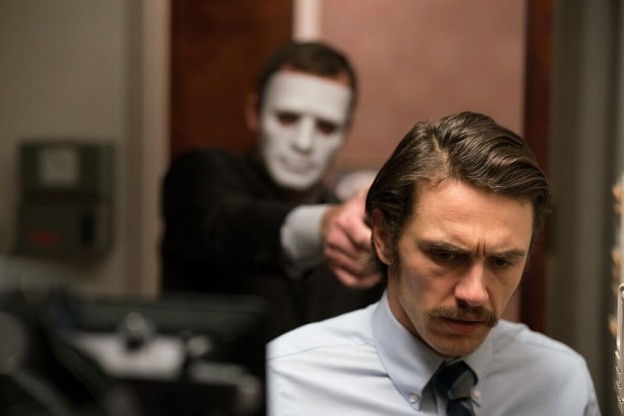 It’s easy to see what Dan Bush had in mind with The Vault: melding the bank heist genre with some gruesome Zombie action looked a great idea. Unfortunately, he gives away the plot in the off-commentary at the very start. Instead of suspense and thrills we get what we expected; and in spite of a strong ensemble cast, the suspense – on which both genres rely – is minimal.

Sisters Leah (Eastwood) and Taryn (Manning) are helping their brother Michael (Haze) to pay back his enormous debts to some vicious gangsters, by staging a bank robbery. The concept of a bank robbery today seems quite antiquated, and we soon learn why: the siblings are totally irrational in their planning, their execution, and thei family dynamics. Vee is an out-and-out psychopath; Michael flips between guilt and violence – making Leah the sanest of the lot (which doesn’t say much). The trio’s reactions are the most promising aspects of this slack thriller. Bank employees Susan Cromwell (Kilcher) and Ed Maas (Franco) are drawn into the powerplay of the would-be robbers, who are soon contacted by police officers outside the building. A narrative along the lines of Dog Day Afternoon, would have worked better, instead Maas tells the trio about a huge underground vault with six million Dollars in the cellar of the bank. When it emerges that the notes from the pitiful score of 70 000 Dollars are banknotes from the early 80s when the bank was the victim of a bloody heist, we realise what will happen after Michael forces his way into the vault….

This is bland and conventional stuff to look at and by way of its storyline – in the resulting incongruence of the genre collision we lose any interest in the protagonists’ fate. AS

NOW OUT ON RELEASE