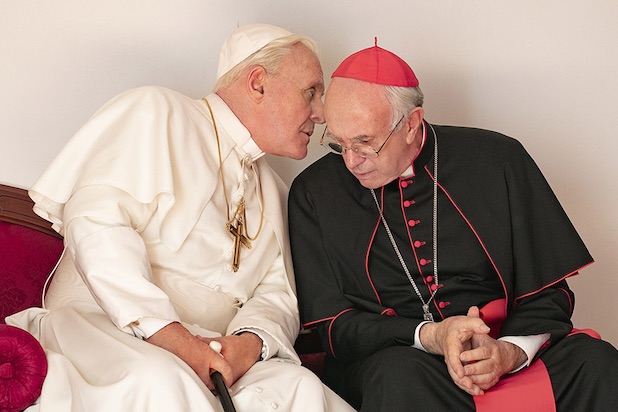 Jonathan Pryce and Anthony Hopkins add weight and sophistication to this soigné and sumptuously mounted tale of Papal spirituality and responsibility. As the two great minds on the opposite ends of the spiritual debate they chew over and elegantly digest Anthony McCarten’s witty and thoughtful script that imagines the conservative Pope Benedict (Hopkins) paving the way for the liberal Pope Francis (Pryce) to forge a new future for the Catholic Church.

Pope Benedict XVI quotes from Plato when he makes his unprecedented decision to abdicate into order to guide Pope Francis into his vacant chair: “Those who don’t want to lead are the best leaders”. Yet the pontiffs couldn’t be more different, Francis is a warm, generous and garrulous soul who enjoys football and travelling to visit his vast congregations. Benedict is a detached and fastidious intellectual who dines alone and plays classical music on the papal piano.

The two are first seen meeting for a private tete a tete in the peaceful gardens of the Castel Gandolpho – and we are transported there by Cesar Charlone’s impressive widescreen camerawork that also captures the intimate spaces and vast crowd scenes in this thoughtful and and surprisingly moving drama.

They discuss world poverty, the migrant crisis and climate change and these are skilfully woven into black and white flashbacks picturing Pope Francis as a young Argentinian Jorge Mario Bergoglio (played convincingly by Juan Minujin), who found himself receiving the calling just before his intention to marry.

Hopkins is steely and often vituperative as Benedict. He stresses their crucial conflicts and is dour in his discussions – although he occasionally lightens up with acerbic one liners: “It’s a German joke. It doesn’t have to be funny.” Pryce adopts an gentle, over-awed expression and sometimes appears back-footed as Francis, and we genuinely warm to him – this is Oscar level stuff.

And we see him journeying to the backstreets of Lima and Lampedusa, cooking in soup kitchens and visiting the needy and poverty-stricken. At this point Meirelles delves into striking archive footage of mid 1970s Chile showing the desperation on the streets when people where disappearing during the Coup d’Etat.

Eventually the two reach a common agreement cleverly conceived in the spry and intelligent script. And Benedict gradually shows the silver lining to his heart of stone as a really warm friendship develops. Hopkins gives luminous and considered performance full of quiet integrity in fitting with the Pontiff’s perceived wisdom. After all, these are two players at the zenith of their game – and it shows – in this highly enjoyable and inspirational piece of filmmaking. Let’s hope God approves. MT