With a narrative based on the novel by Patricia Highsmith, this long-awaited debut feature from DRIVE screenwriter Hossein Amini is a lavish affair set in sixties Greece. And what could go wrong with such a fabulous cast, magical sets, gorgeous tailoring and a romantic original score?  The answer is nothing. One of the most gripping and sophisticated thrillers for some time, THE TWO FACES OF JANUARY stars Viggo Mortensen and Kirsten Dunst as an American married couple, Chester and Colette MacFarland, and Oscar Isaac (Llewyn Davis) as their tour guide, Rydal. After meeting up in by chance in Athens, a terrible accident that forces the trio to flee to the islands whence they embark on a dangerously eventful journey that ends in tragedy for all concerned. 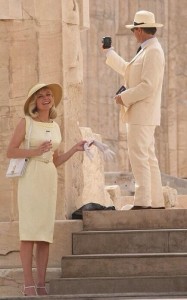 This is a complex, dark, Hitchcockian thriller despite its sun-drenched Mediterranean setting and Viggo Mortensen and Oscar Isaac are first rate as the terrible partners in crime who never quite trust each other as the double-cross their way through Europe fleeing from their suspicious past. Mortensen plays a covert swindler, Isaac an overt skimmer but both are charmingly beguiling with Kirsten Dunst playing their perfect foil with sexy restraint.  Visually alluring thanks to Marcel Zyskind’s rich cinematography, the drama is complimented by Alberto Iglesias’s classy film noirish score which really sets the elegant tone for this sophisticated crime story.

The narrative is driven forward by ambiguity and doubt as the trio proceed from Crete to Istanbul where an exotic twinge of the East adds further piquancy to the plot. If you haven’t read this minor novel of Highsmith, then it would be a shame to reveal the entire proceedings but this is a thriller to savour and salivate over long after its tragic denouement brings the foray into a luxurious playground to a close. MT