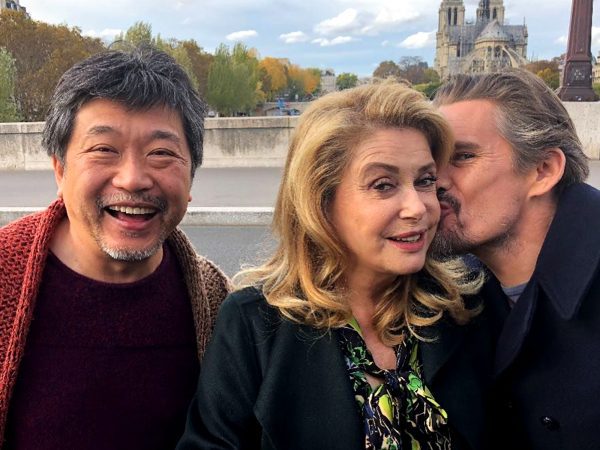 From the outset you wonder if Deneuve’s screen persona bears any similarity to her 70 something self. She looks stunning as the narcissistic matriarch at the centre of this story of family dysfunction. Kore-eda clearly loves Deneuve in this first film made outside his homeland of Japan. Binoche is tight-lipped and caustic as a daughter whose childhood memories are far from rosy. There were good times and bad, but once again, human memory can be complex and unreliable, and Kore-eda returns to a theme he has mused over before, Without Memory a case in point. The Truth is more enigmatic and this does not always work in the film’s favour. The opening scene shows his hallmark lightness of touch: Deneuve’s Fabienne is being interviewed by a sycophantic journalist, and the diva’s curt answers give this vignette an amusing twist. Meanwhile she holds her own family in lip-curling disdain, particularly her son in law Hank (Ethan Hawke) whose loose American style jars with the prim French comme-il-faut set-up.

Lumir (Binoche) has brought her own daughter Charlotte (Clementine Grenier) to stay at the elegant family mansion surrounded by leafy gardens where a turtle called Pierre also roams. An uninvited guest turns up in the shape of veteran actor Roger Van Hool (The Woman Next Door) who plays Fabienne’s ex-husband Pierre.

Meanwhile Lumir feels hard done by at not being sent a copy of her mother’s book prior to publishing. She also feels their relationship is poorly reflected. Naturally Fabienne disagrees but it seems the book is merely a PR exercise. It features Sarah, an actress friend of the family who became close to Lumir, and posed a threat to Fabienne. Deneuve is in the throes of filming a sci-fi outing entitled Memories of My Mother which has a character called Manon (Manon Clavil), who is purportedly very similar to Sarah. The sci-fi has an interesting relevance here as it is based on a book by Ken Liu about a dying woman who buys herself more time by escaping into space, where she remains youthful while her daughter continues to age, Dorian Grey style.

Another person whose nose has been put out of joint by the memoirs is Fabienne’s faithful personal assistant Luc (Alain Libolt). So much so that he resigns just as the Sci-fi film within the film is about to start shooting. He feels aggrieved that Fabienne has never mentioned his devoted service. This is Deneuve’s show and she is not the slightest bit interested in her grand-children, or anyone else for that matter.

The character who brings out the best in Fabienne is predictably her boyfriend Jacques (Christian Crahay). Deneuve maintains the nuances of enigma in a graceful and subtle turn in this complex study of maternal influences, and also creative personalities. There are similarities here with Frankie that focused on another powerful matriarch in the shape of Isabelle Huppert, and also The Midwife where Deneuve plays an equally self-serving but bewitchingly charismatic woman at peak of her influence. MT