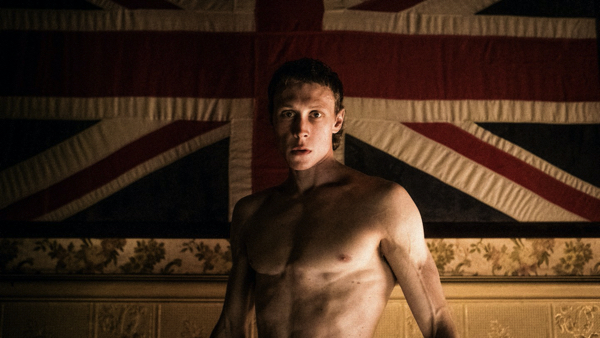 Australian thrillers are usually brutal and anarchic, emblematic of the scorched earth savagery of their remote and often desiccated homeland. Justin (Snowtown) Kurzel’s latest foray into fiendishness is adapted by Shaun Grant from Peter Carey’s novel, and inspired by the infamous Ned Kelly, who raged through the bush in a melodramatic meltdown during 19th-century English colonial occupation.

This incarnation of Kelly is a tightly muscled racier beast that Carey’s animal, bred out dysfunction to become a macho psychopath of the worst order, and obsessed by an abusive mother Ellen (Essie Davis) who sold him as an apprentice to local bandit Harry Power (a scabrous Russell Crowe ) who taught him the tricks of the trade. Kurzel excels in creating vicious villains. Here he shows us the how Ned Kelly (an outlandish George MacKay) became such a hell-raiser, through a serious of episodic accounts that link the past with his criminal activities as leader of the gang. These encompass a weirdly mixed-up sexual ambivalence and a predilection for homoeroticism and cross-dressing.

Kelly emerges a weak-willed brothel-creeper from the outset, unable to avenge his mother’s sexual abuse at the hands of an English sergeant (Charlie Hunnam), and drawn to the company of other low-life members of the English regiment. One is Nicholas Hoult’s Constable Fitzpatrick who frequents a local brothel, where Kelly falls into the clutches of Mary (Thomasin McKenzie) and morphs into full-blown insurgency against the British (The Nightingale here we go again). And it’s at this stage that film starts to visually resonate with Kurzel’s 2015 outing  Macbeth and there are also echoes of Snowtown (2012) but it’s also here that is starts to unravel into something unhinged but also hypnotic, breaking free from its period drama into a psychedelic thriller.

Mesmerising for the most part, True History is an ultimately an uneven experience unable to maintain the sheer pace of its early scenes. But its vehemence, passion and visual allure burn bright, and the final part of the film descends into extraordinary surreal psychodrama. Kelly is a chameleon character who always knows where his bread is buttered, and is able to ingratiate himself with the right people at the right time – and George Mackay once again shows his amazing talents in this transformative role. A psychedelic and shatteringly violent experience but one that is compelling despite its flaws. MT