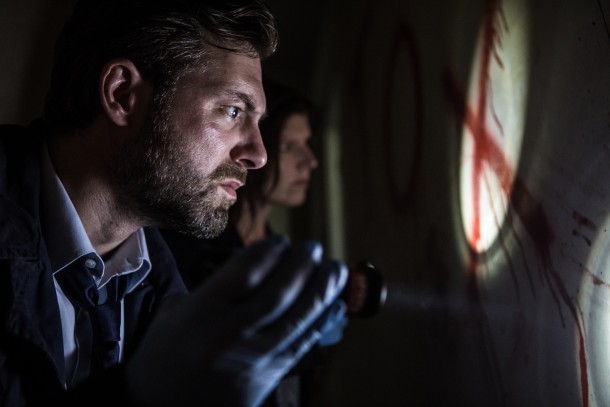 If you’ve ever spent a wet weekend in Ghent you’ll instantly be familiar with the setting of this sombre Belgian film, adapted from British novelist Mo Hayder’s thriller. Complicated and very long at over two hours, those familiar with her novels will be at home with the characters; if not, it’s worth dipping into her debut ‘Birdman’ to acclimatise yourself with activities of Hayder’s regular protagonist DI Jack Caffery. In this screen adaptation of The Treatment, Caffery is transformed into Flemish investigator Nick Cafmeyer by Geert Van Rampelberg, who, apart from having a name to be conjured with, is a man who channels high levels of energy and emotion into investigating a paedophile crime linked to his past, and the mysterious disappearance of his younger brother, Bjorn.

In the rain-soaked Belgian countryside, Cafmeyer is still suffering the effects of his brother’s abduction and is taunted by noncey neighbour Ivan Plettnickx (Johan van Assche) who was implicated yet cleared from the original investigation. Herbots builds tension with a niftily mounted series of slo-mo sequences that lead us to the discovery of a handcuffed couple imprisoned in their home. Cafmeyer and his colleague Danni Petit (Ina Geerts) are summoned to find out why the place is covered in urine and their son is nowhere to be seen. After the boy is found dead in a tree, the father (Tobo Vandenborre) and mother (Brit Vam Hoof) differ on their version of events, and it appears that the father has something to hide.

During the course of his investigation, Cafmeyer chances upon the suicide of Plettnickx, whose death clears him from the suspect list but the clues of his brother’s ‘death’ die with him. Another possible perp in the shape of a pasty-faced and puny swimming instructor (Michael Vergauwen) lurks around the locale with intent. Meanwhile the suspect, who leaves his trademark bites on his victim’s body, has broken into another couple’s home, Steffi (Laura Verlinden) and Hans Vankerhove (Roel Swanenberg), the same modus operandi. In scenes of heightened melodrama it emerges that this damaged individual is using his young victims as experimental fodder to further his belief that female hormones are responsible for his impotence but this fascinating strand is not the central thrust of Herbots’ narrative. He is more concerned with pursuing Cafmeyer’s histrionics as he is wound into a world of rampant paedophilia and the past. As the plot unspools, so does the dramatic tension despite Herbots’ histrionic treatment – it is simply untenable to countenance the extreme levels of hysteria and intensity demonstrated by our protagonist on an ongoing basis for over two hours without our attention wandering, for the sake of some light relief, into endless plotlines and characters whose backstories are never developed sufficiently for us to care. Despite excellent performances, (particularly from Rampelberg), and some masterful camerawork, THE TREATMENT cries out for a different treatment and would work better as a three or even five parter where Herbots could really get his teeth into this ground-breaking area of scientific crime and develop his characterisation more satisfactorily. MT

THE TREATMENT IS ON GENERAL RELEASE FROM 22 MAY 2015