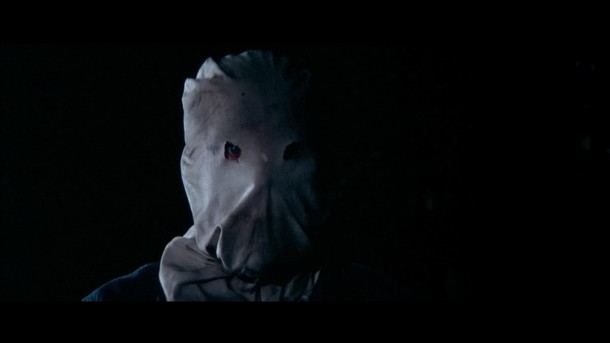 Based on a feature film of the same title directed in 1976 by Charles B. Pierce – based on real events in 1946 – this latest remake has nothing new to add. The only saving grace is the 40s hard core-retro aesthetic, which compensates (but not too much) for an otherwise really tedious double re-make, told in episodes that are sensational (and gruesome) in themselves, but lack any cohesion.

In Texarkana, a boarder town between Arkansas and Texas, we re-visit the so-called ‘moonlight murders’, where five people where killed by a masked killer in ten weeks – a culprit was never found. Starting again from reality, the story kicks off with a screening of the 1976 version in a drive-in cinema in Texarkana which happened, until recently, on Halloween. Jami (Timlin), a timid young woman whose parents died in a car crash when she was little, hates the movie and begs her boy-friend Corey to drive off. They do and find a secluded spot in the woods to make out, whereupon the bag-masked phantom strikes again, killing Corey, leaving Jami to spread the warning  “that this is for Mary, make them remember”.

Whilst looking for the new and old murderer, the Police are having no joy and Jami’s grandmother (Cartwright) is killed at a petrol station, when the pair try to leave the town. The brutal “Trombone” murder of the original slaying is replayed, before a rather disappointing and hollow explanation. AS