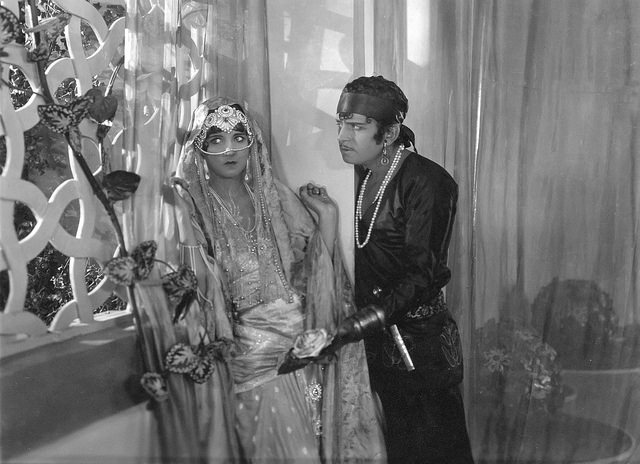 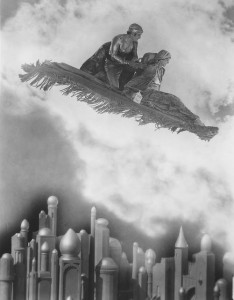 THE THIEF OF BAGDAD was Douglas Fairbank’s pet project after success with The Three Musketeers (1921), The Mark of Zorro (1920) and Robin Hood (1922) had cemented a Hollywood career. His powerful physique and athletic prowess that was later to make him the inspiration for Superman (despite being only 5.7”) fits well with this swashbuckling role that required him to scale walls stripped to the waist as the charismatic and infamous Arabic ‘Thief’ Ahmed. Based on one of the ‘1001 Nights’ tales, Ahmed uses his powers to win the heart of the Princess, but his father The Caliph (Brandon Hurst) forbids the marriage so the couple to embark on an exciting adventure involving a crystal ball, a magic apple, an invisibility cloak and, of course, a magic carpet. But vying for her hand is also the deceitful Mongol Prince (Sôjin Kamiyama) who also has a few more tricks up his sleeve. The first Chinese American star, Anna Way Wong has a role as the Mongol slave.

Under the direction of Raoul Walsh this is a dreamy and visually seductive fairytale affair that glistens with all the mystique of Araby and must have enchanted audiences young and old on its release in 1924. Today it’s still mesmerisingly beautiful to watch. and its silent format adds to its magnetic allure with Julanne Johnston as a simply luminous Princess. Her delicately romantic costumes were the creations of Mitchell Leisen, who was known for his elegant designs worn by Olivia de Havilland. After training under Cecil B De Mille he went on to work on The Thief. With its gorgeous technicolour sequences by Arthur Edeson and sumptuous sets by William Cameron Menzies transporting us to a distant world of make-believe, it was one of the costliest outings of the silent era and also the most lush, even by Hollywood standards. Carl Davies’ atmospheric score adds to the magic making this an ideal film for Christmas for all the family. MT