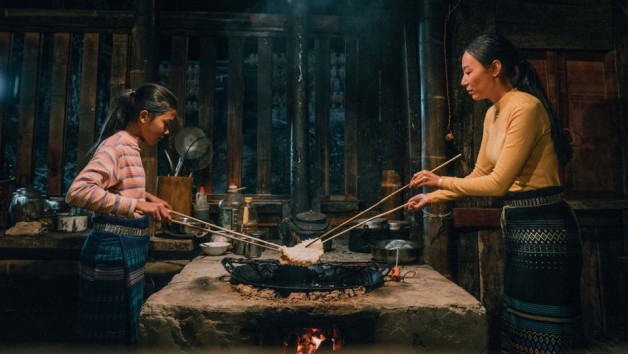 Chinese filmmaker Pengfei’s Underground Fragrance was a delicately rendered story of love amongst the ruins of Beijing’s property boom, and won him the Fedeora award at Venice Film Festival 2015. His second feature explores love of a different kind: that of a Dai woman for her only daughter and her strongly felt ethnic heritage, in the Yunnan province of China, where the drama unfurls in magnificent pastoral landscapes and vibrant interiors of her small village.

Taste of Rice Flower brims with positive energy unlike its visually alluring but oppressed predecessor and takes a more pragmatic approach to its marginalised characters who are also caught in the cultural maelstrom of 21st century change. Pengfei gently ruminates on the lives of these ethnic minorities, and the result is enchanting. Many Eastern cultures have travelled to the West and the large cities in search of work, and although it’s normal for their young to be left at home with older members of the family, the naturally presents a challenge for both children and parents, and this is the focus of the narrative. Ying Ze – who co-wrote with Penfei – plays the mother (Ye Nan) whose city experience has left its sophisticated mark on her appearance and tastes, but she is now glad to be home. But village life is far from idyllic as the local women complain about dressing in costume for an cultural event and the children have all the latest gadgets and modern labels, not to mention a newfound sense of entitlement, as they try to bargain for favours with their elders.

Sadly Ye Nan’s daughter (Ye Bule) has gone the same way, although insecurity and latest resentment could be the reason for her bad behaviour and lack of parental guidance. When he school friend Xianglu (Ye Men), falls ill the elders try to cure the girl with their shamanistic rituals — eventually leads to tragedy.

Taste of Rice Flower is a simple parable but never drifts into melodrama or cliche. If offers Pengfei a chance to raise the profile of changing values emerging out of a clash in tradition and modern life. The humour is often subtle but effective, and Liao Pen-jung’s ravishing visuals find beauty in everyday life in a thoughtful and subtle insight into contemporary China. MT