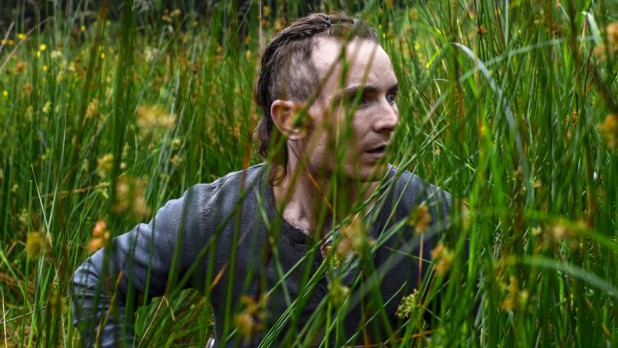 Stephen Fingleton’s monsyllabic fantasy thriller imagines an hostile, post-apocalyptic future where mentally fragile survivors are forced to forage and fend for themselves in the fertile wilderness. Trusting no one they grimly barter food, lodgings and even sexual favours as they eek out a grim existence.

Martin McCann plays an unattractive, unyielding man who allows a woman and her teenage companion to share his meagre smallholding on condtion the younger sleeps with him. But its an unhappy household where the women gradually plot against him as an atmosphere of uneasy hostility stealthily permeates their silvine tranquility. A judicious use of silence allows the ambient sounds of nature to make their presence felt: running water; rustling leaves;  bated breath; stifled screams all add to an unnerving sense of doom and edgy anticipation in a world where ferility still holds the trump card from a female perpective. Elegantly framed and suberbly crafted THE SURVIVALIST is a triumph of ‘less is more’ filmmaking. In one scene, Damien Elliott’s camera hovers above the verdant woodland evoking an almost unworldy sense of forboding as eventually the three are forced to close ranks in another battle for survival when the threat from an encroaching enemy brings tragedy in its wake. MT

ON GENERAL RELEASE FROM 12 FEBRUARY 2016