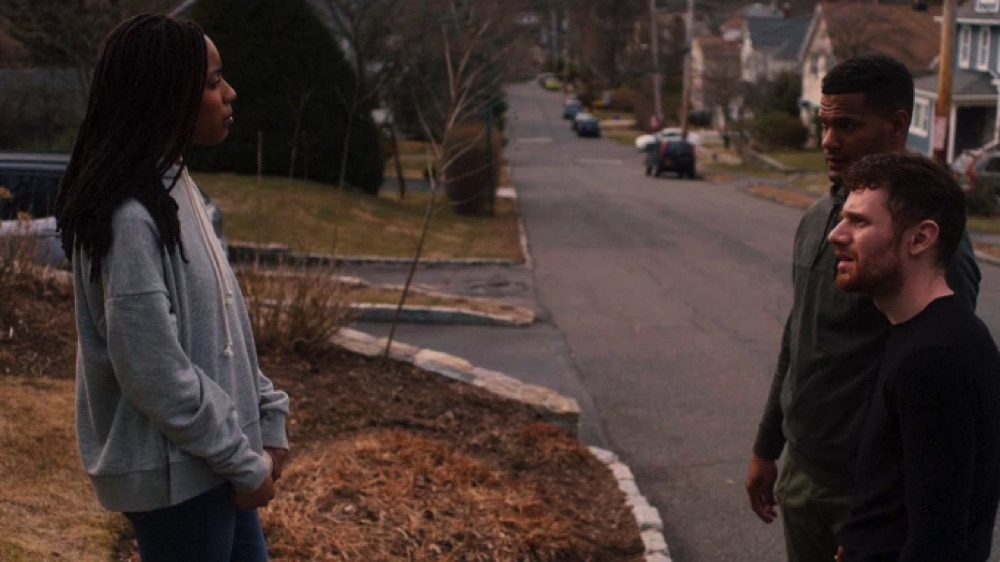 Made on a (crowd funded) mini-budget, The Surrogate is one of those worthy films you really want to like: Take a pregnancy, a Down’s Syndrome baby, a surrogate mother and two gay ‘fathers’ and you have the recipe for a success. But no, Hersh’s script lets him down, and the actors can’t help.

The titular surrogate mother is Jess Harris (Batchelor), who, in spite of an MA, is having difficulties as a web designer for a Non-Profit outfit which does nothing to value to her efforts. Jess throws all her energies into becoming a surrogate mother for best friends Josh (Perfetti) and Aaron  Jones (a lawyer for a prestigious law firm, who has drawn up a contract between Jess and the gay couple).

Since surrogacy is illegal in the State of New York, money cannot change hands. But after the first euphoria, it turns out the baby’s genetic make-up points to Down’s Syndrome. At first, Jess intends to leave the abortion option to the men, but after they voice support for a termination, Jess becomes a saint-like fighter for the unborn baby, taking the couple to a Help Centre for those affected and a visit to family with a Special Needs child. Eventually she literally rail-roads a mother of an afflicted child into answering all her questions about why she, Jess, should not terminate the pregnancy. The bemused mother just can’t give an affirmative answer. From selfless helper, Jess becomes increasingly judgemental when the men decide, once and for all, to opt for a termination.

Hersh’s characters are rather one dimensional, the gay couple only defined by their sexuality. Jess’ family members come and go, so does a sudden love interest. We are left with a hectoring main character who pushes forward ideological points of view, rather that a real person full of contradictions and doubts.

DoP Mia Cioffi Henry tries her best with the mundane environment, but the narrative only really offers her talking-head shots, All the performances suffer from Jess’s central position – the feature being determined by a morality-play insincerity. Many valid questions are raised, but are left hanging in the air. AS

IN CINEMAS FROM 9 JULY