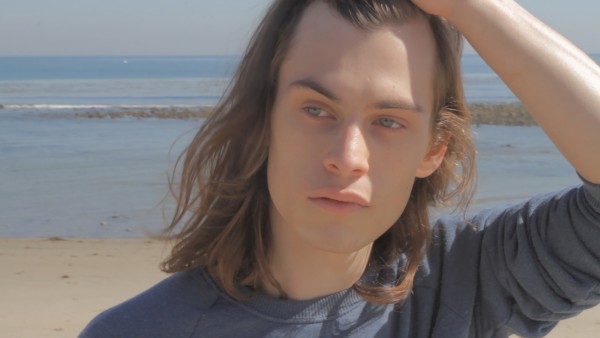 The line between art and caricature is a usually a fine one, but Michael J. Saul (Crush) has managed to cross the line with this wrong-footed romantic drama THE SURFACE.

Set in contemporary California, where the sun always shines, two high school students, Evan (Haines) and Chris (McDonald) live together, their beautiful bodies permanently on show, director Michael J. Saul doubling up as DoP. Chris is rich, and Evan is an orphan, always on the search for his identity. One day, he buys a 8mm camera from an old man. When he returns to see the man, his son Peter (Redford) tells him that his father has died. Peter gives Evan old home movies, shot by his father, and Evan re-edits them for a school film festival. He falls in love with Peter, and moves in with him. But said search for his identity starts to muddy the waters…

The only value of THE SURFACE is as a vey badly-acted soft porn movie. Dissolves and slow-motion are reminders, and not by chance, of the bad taste of some 1970s films. But it is the dialogue which takes first prize for sheer awfulness . When Peter philosophically states “people leave your life or they don’t”, Evan answers soulfully “I think that is sad”. Evan’s musings are equally deeply felt: “I don’t even know what happiness is, but it is not so important as people think”. And finally, he leaves us with another gem: “Some people find themselves when they are young, some, like me, take a lifetime”.

To say that THE SURFACE is an amateur production, is a slap in the face to amateurs. AS