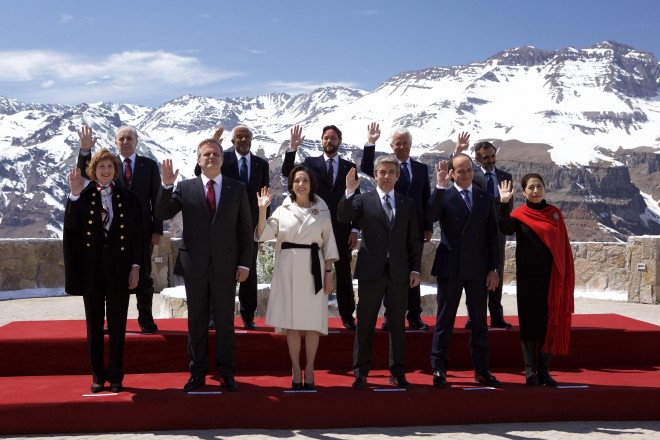 Another corruscating critique of politics comes from Director/co-writer Santiago Mitre (Paulina) whose cynical eye captures the way politicians deal with each other and their citizens. In spite of structural fault lines, Mitre captures an uneasiness which also affects the personal sphere of the participants.

Argentine president Hernan (Darin) travels to Chile where the presidents of eleven South American States meet to form an Oil producing conglomerate on the same lines as OPEC. But Hernan has trouble at home: his estranged daughter Marina is mentally unstable, and her ex-husband threatens to unmask the president with a corruption scandal which happened when Hernan was a mayor. Hernan is welcomed by the Chilean president (Garcia), who has chosen a mountain retreat in the Andes, reminiscent of the Swiss Alps, for the titular summit. Behind the scenes meetings are obviously more important than public, plenary sessions, as it becomes soon clear that Hernan’s vote will be decisive. The Brazilian president is totally opposed to any participation of the USA, whilst Hernan plays a waiting game. Suddenly, all hell breaks lose with his daughter and son in law making his official duties fraught with difficulty, and the American envoi (Slater), makes him an offer that’s almost impossible to refuse. The only honourable person seems to be a journalist (Anaya), who grills the presidents mercilessly. But Hernan is not the only one well-schooled in avoiding concrete answers. The mountain resort is not only geographically removed from the population, it is a symbol of the political structure of the sub-continent. Hernan is sleeping with a mistress, and the luxury of the surroundings lacks for nothing: it might as well be Washington DC. The score by Alberto Iglesias reflects the uneasiness of the setting, and Javier Julia’s (Wild Tales) images, particularly the panoramic shots from high above, show the splendid isolation of the rulers. AS