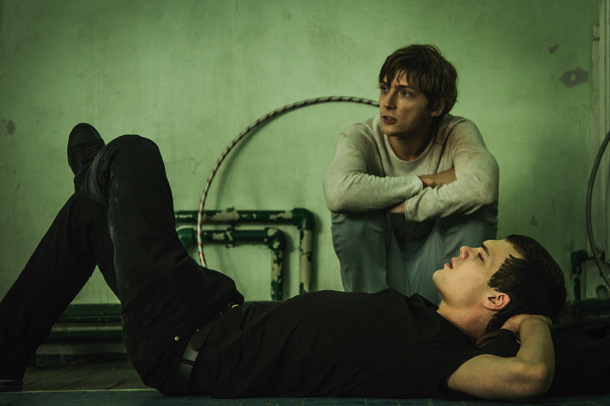 Whilst Muchenik means ‘martyr’ in Russia, ‘uchenik’ translates into student – since this wordplay would not be understood outside Russia, the English title Student was chosen. But Serebrennikov’s anti-hero Venya Yuzhin (Skvortsov) is exactly the amalgamation of the two: a martyr in his own and in the eyes of the worldwide anti-enlightenment movement; a student for teachers, who educate in believing in a rational world and the importance of tolerance.

Attending secondary school in Kaliningrad Oblast, Venya is an angry pupil: his first hate object is his divorced mother Inga (Aug), who is holding down three jobs to survive. Venya attacks her with his rabid bible quotes (one of hundreds, annotated on screen), calling her a whore for leaving the father, who abused her. Inga wails: “I wish he collected stamps or jerked off all the time”. At school, Venya, afraid of his sexual orientation, rages against the girls, wearing bikinis in the swimming pool. The reactionary head teacher Stukalina (Bragarnik) even tries to accommodate Venya: she asks the PE teacher to have the girls wear one-piece bathing suits. But Venya is far from finished: he wears a gorilla outfit (shades of Karel Reisz’ 1966 British New Wave film Morgan!) in an Economy lesson, arguing against the need for industrialisation, because it does not confirm with the demands of St. John in the bible.

On a personal level, Venya is only to keen to kiss an attractive female student, and he also tries to heal a limping co-student, putting his hand on his deformed leg. Confronted by the orthodox priest (Roschin), Venya accuses him of lacking fighting spirit “unlike the martyrs of the Jihad, who want to die for their cause”. But Venya’s main enemy is the biology teacher Elena (Isakova), whose views on contraception and evolution he challenges. Again, Stukalina gives in, asking Elena to “find a tolerable mixture of scientific and religious ideology”. Venya has, in vain, asked his handicapped friend to manipulate the brakes of Elena’s motor Scooter, and clobbers him with a rock when the boy tries to kiss him. In a final confrontation, Stukalina takes sides, when Venya accuses Elena “to have fondled him”: she agrees with the priest, that Elena’s worldview is governed by her being Jewish.

The real monster of Student is not Venya, but Stukalina, whose far right-wing views on feminism, Judaism and homosexuality were the norm in Stalinist Russia. She is very much at home in Putin’s Russia, as intrinsic a nationalist state like the old USSR.

DOP Vladislav Opelyant’s visuals are breath-taking: his looping long shots set the antagonists on their confrontations. The images of Venya’s and Inga’s flat are symbolically divided: her living room is full of ungainly figurines, the walls covered with gruesome wallpaper; his ‘prison’ room is dark and spartan: the wallpaper ripped off, the windows closed with planks. Laibach’s pounding “God is God” is adequate good choice for an anthem: Serebrennikov shows a Russia of oppressive puritanism where hate is becoming institutionalised – again. AS/MT