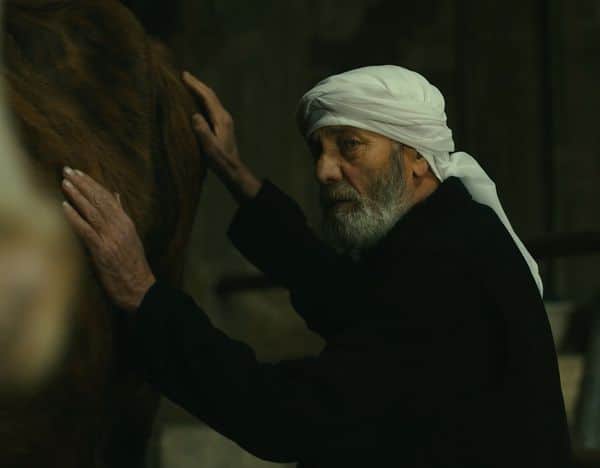 “How can we fear death when we have not lived”

Amir Fakher Eldin’s feature debut a melancholy parable, a tribute to all those oppressed or forced to live elsewhere. As Palestine’s Oscar 2022 hopeful the film also reflects the disenchantment of the older generation with the next one, as it in turn considers an uncertain future in the internecine conflict. Laced with metaphors and sage quotes from ‘the prophets’, this quietly engrossing slow-burner establishes character and place before moving on to a tense but satisfying conclusion.

On an opening vignette a father (Mohammed Bakri) is writing his will, disinheriting his only son Adnan (Ashraf Barhom, an borderline alcoholic failed doctor who has always disappointed him, leaving all his worldly possessions to the temple, apart from the treasured family orchard which produces a decent crop of apples and cherries on the slopes of the occupied Golan Heights.

Amid the sound of distant shelling we meet Adnan, tending the orchards in the glowing shades of late Autumn, a dusting of snow glistens on the distance mountains, a chilly reminder of another winter of discontent. Rather than turn in a profit the orchard is the his refuge to get away from the everyday realities of a cow with an infection, a wife who wants to emigrate, and a daughter who desperately needs his guidance. Meanwhile his brother in law demands he shape up or ship out. At least he still has his faithful dog Kosba.

On his way home Adnan is stopped by Israeli soldiers who smell drink on his breath, he winds them up a provocative way, claiming to be heading to Damascus and challenging them over the Israeli occupation. Not a clever idea in the circumstances, but Adnan is not a particularly sensible man whose poor decisions have left him and his family financially broken.

But Adnan is a decent soul, and his next decision is a good one. Driving with his friends Akram and Hani, later that night, they pick up a wounded man who is gravely ill, and needs a doctor. Hani insists on knowing the man’s identity before they get a doctor. But Adnan objects to Hani’s lack of care: whoever the man is he deserves saving. Using his medical knowledge he treats the man’s leg wound himself.

When he wakes up the man claims to be a Syrian war photographer searching the Golan Heights for his grandparent’s house before they were exiled to Syria in the 1967 war. A Syrian exile himself, Hani insists on seeking the advice from the elders, still believing the photographer to be an imposter. Should the traditional values of neighbourliness transcend political differences? Eldin’s absorbing drama raises all sorts of questions, but in a poetically appealing, unoffensive way. MT