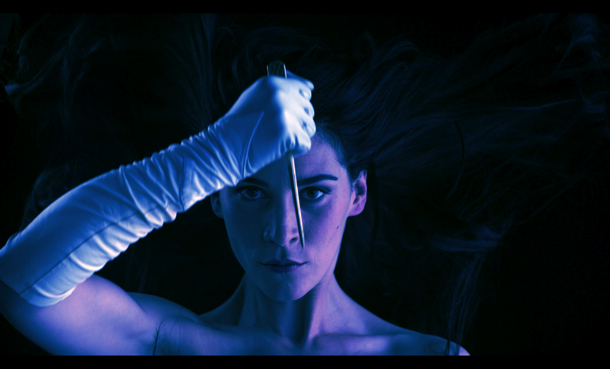 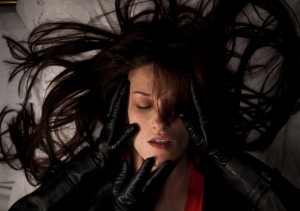 In their new film The Strange Colour of Your Body’s Tears, co-directors Hélène Cattet and Bruno Forzani build upon the giallo-inflected style and themes of their previous work, considerably upping the ante to create an even headier mix of colour, sound, sex, fetish and murder. To some it will be intoxicating, to others nauseating. This is cinema as visceral experience. The enigmatic story at its centre concerns Dan Kristensen (a blank but effective Klaus Tange) and his attempts to discover the whereabouts of his missing wife. As the film begins, we witness Dan asleep on an airplane, the camera creeping slowly towards his eyes. Is everything that follows a dream? It certainly feels like a nightmare made flesh.

The Strange Colour of Your Body’s Tears is horror by way of the avant-garde, a spell of uneasy atmosphere, a vision full of Anger. The frame of the screen dissects alongside the (often sexualised) bodies it shows us, the split-screen images becoming mirrored, kaleidoscopic, double exposed. New faces form out of extreme close-ups of multiple actors, and strong colours mix with negative images and black and white stills brought to life through stop motion pixilation. Combining, as they do, such a breath-taking barrage of visual tricks with an equally active soundtrack, Cattet and Forzani certainly risk overloading their viewers. But the effect also imbues the film with a dense dreamlike atmosphere, mirrored in the fractured intensity and surrealist logic of the narrative itself. At one point, Dan becomes trapped in a loop of false awakenings, the visuals repeating, making us feel his pain: just as he is trapped, so are we. There are hints elsewhere that maybe his wife too felt trapped – in her marriage to Dan – and the film can perhaps be taken as a metaphorical examination of entrapment, with us, as viewers, also trapped within the confines of the screen.

But this is storytelling placed through a Surrealist blender. Narratives within narratives begin to form, and it seems storytelling itself might be the subject. The walls – of the apartment and of the cinema – come alive with the sounds of heavy breathing. People hold stethoscopes against ceilings and peer through holes they have drilled. Voyeurism, yes, but perhaps also watching and listening, trying to make sense of the stories forming around them. One story, told to Dan by a detective, is pointedly cut short by Dan asking ‘What does that have to do with my wife?’ It seems there is a dark humour at play here too. The film may be a game. Certainly, it is a challenge. Events are fractured and told in close up, so even the screen space isn’t clear. Faced with such an onslaught, how are we, as viewers, meant to decode it? Or aren’t we? Multiple meanings proliferate, but perhaps we are simply meant to experience it.

But as the rich, layered and decadent experience continues, a new question arises: what is it all amounting to? And then the film begins to drag, and the feeling increases. Another iris dilates in close-up, and the effect slips towards the comical (and the tedious). Interpretation slides further away from us. But, nevertheless, the overall experience remains visceral, exciting and experimental. Coming at us in a world (and a genre) where the same old clichés are thrown out time and time again, The Strange Colour of Your Body’s Tears is, ultimately, refreshing and invigorating filmmaking.  ALEX BARRETT