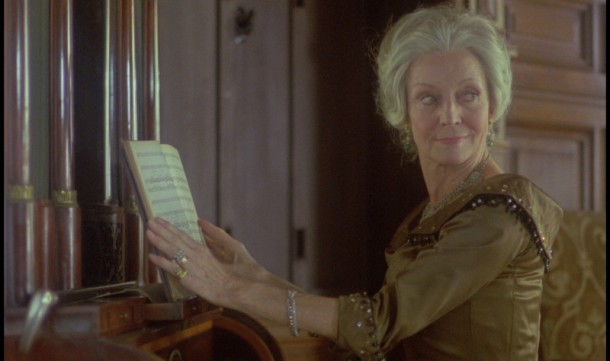 The Strange Case of Dr Jekyll and Miss Osbourne (1981)

There have been many striking film and TV adaptations of Stevenson’s novel. Favourites are Mamoulian’s Dr.Jekyll and Mr.Hyde (1931) and Baker’s Dr. Jekyll and Sister Hyde (1971). Borowczyk’s The Strange Case of Dr Jekyll and Miss Osbourne joins the illustrious list. Although Mamoulian’s film remains the best adaptation, Borowczyk’s treatment is the most radical, having a ferocious energy bordering on the transgressive.

The Strange Case of Dr Jekyll and Miss Osbourne is a claustrophobic film that rarely departs from Jekyll’s house. Patrick Magee plays an army general. Udo Keir is Dr Jekyll. Clement Harari a priest, and Howard Vernon another doctor. These four pillars of the Victorian establishment, supported by their female guests, are depicted as controlling and repressive. At a dinner-party debate Borowczyk pierces their conversation with brief flash-forwards to the rapes and murders to come. These are not just the crimes of Mr Hyde but the imaginings and acts of some of the guests.

The ‘voyeurism’ of Dr Jekyll’s fiancée Miss Osbourne (Marina Pierro) is a key sequence in the film. The shift from a predatory male to a curious prolonged female gaze is not only radically different for a horror film but teases us with its overlay of ideas. A conventional director would have depicted a passive and increasingly frightened Miss Osbourne but Borowcyzk’s subtle direction of Marina Pierro conveys amazement and fascination as to what her future husband’s antics. When Jekyll prepares his potion he knocks it back and adds it to his bathwater, writhing and splashing in the bath to become Mr Hyde (Gerald Zalcberg, radiating a sub-human menace). Miss Osbourne is beguiled by the transformation process. Even after Hyde tries to kill her, she is not so much intent on understanding Jekyll but becoming a Hyde-like creature herself.

There are now two versions of The Strange Case of Dr Jekyll and Miss Osbourne. Viewing the dubbed English version, the acting appears stilted and sometimes pushes the film into the sexy slease category into which Borowczyk’s later films were unfortunately promoted. Watching the French version (with English sub-titles) brings a greater seriousness of tone suggesting an art movie merely dressed up as a horror film. But both accounts are the same cut of the film with its often extreme violence and after effects (Borowczyk occasionally lingering too long on unpleasant details).

What also makes Borowczyk’s adaptation so outstanding is its visual style. Beautiful soft-hued photography, fabulous framing, composition and lighting have a creepy nightmarish charge combined with Bernard Parmegiani’s electronic score, that haunted me for days afterwards. The Strange Case of Dr Jekyll and Miss Osbourne is a terrific European horror experiment. Very much in the spirit of Stevenson’s dark text it captures the author’s sense of repression by the stripping “of these lendings and springing headlong into liberty.” whilst never succumbing to an inevitable Victorian moralising. Like Herzog’s vampire film Nosferatu the Vampyre (1979), evil triumphs with a libertine flourish. Borowczyk’s film frequently evokes the fetishism of Buñuel and the surrealism of Borowczyk’s own early animated films. It’s all quite amazing. Alan Price.