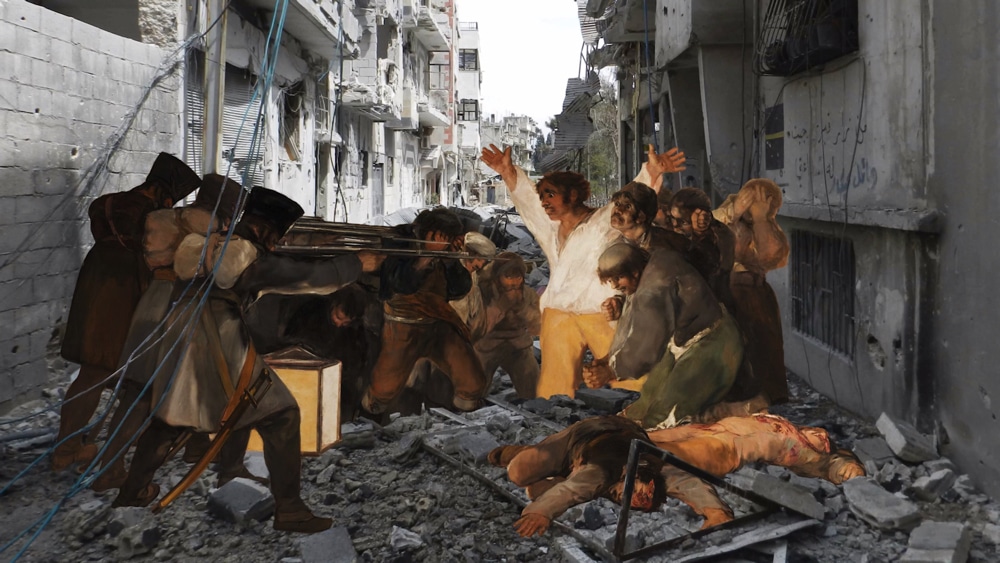 “Art can talk about politics, but politics cannot talk about art”, says Tammam Azzam, a visual artist, living, like many other Syrian exile artists in Berlin. His work, a series of impressive collage landscapes, is possibly the most commercially viable to come out of Syria in recent years, with an exhibition in the States taking place during filming.

The Story Won’t Die is the first documentary feature by David Henry Gerson is a series of interviews with artists who have fled the ongoing Civil War in Syria and are now living in the capitals of Europe. But they are – and never will be, free of their past. Survivors’ guilt complexes are common, so is the fear that despite their newfound artistic freedom, the target audience they are looking for might not be there. Half the population of Syria has been uprooted since the war began, the largest displacement since WWII.

The story of his journey through various refuge camps in Europe is told with breath taking clarity – as if it happened yesterday. “Freedom is unlimited time for an artist”, but Azzam’s work is dominated by his nation’s tragedy: on the bombed ruins which once were streets, Azzam has superimposed Goya’s masterpiece “The Third of May 1808”. He is adamant to see his situation not at as a unique one: “It shows Goya experienced the same: innocent people killed on the streets”.

Abu Hajar, a fierce rapper who now also works in Berlin, talks about the casual violence and the role of the police in Syria: When he was walking with his girl friend in town, her father and uncle abducted him, torturing him for hours. Abu went to the police, who told him, that even if he had been killed, they would not have started an investigation.

Diala Brisly is a painter in Paris. Her works show children with missing limbs, and their pleas: “Leave me my last arm, and leave me what is left of my childhood and leave us alone.” Omar Imam is a visual artist in Amsterdam. He was kidnapped by the army, tortured for five hours. All his teeth were broken, and he could not eat the sandwich they gave him afterwards. He wanted to die, but than he remembered his daughter, who was one-year old and he decided to live. On the fields, he has put up something which looks like scarecrows, but they are really the victims of torture. He plays the violin, wearing a gas mask, to show how much art is compromised by war.

Bihali Hijazi and Lynn Maya are modern dancers in Berlin. Theirs are the most cinematographic images of the feature. But Lynn is particularly affected by survivor’s guilt. Tearfully, she tells the story of her mother who was nearly killed by a sniper, and her brother who lost his life trying to scape to Turkey. “As the oldest, I should have kept my siblings alive.” Mouafak Aldoabl, a choreographer in Berlin remembers, that he had no choice in Syria: stopped by a patrol at a roadblock, he was asked why he had not joined the army and was coerced into joining up but managed to flee the country before he was called up.

DoP Luise Schröder keeps the handheld camera focus close up and personal but never intrusive. Sometimes, it all feels like a confessional: their distance from the war, allows the artists space to reflect but the wounds are still open, and the limits of their art, however brilliant, will never make up for their loss of Heimat. Yes, art can talk politics, but if the politics are deadly, the artists will never be truly free to express their hard won freedom.