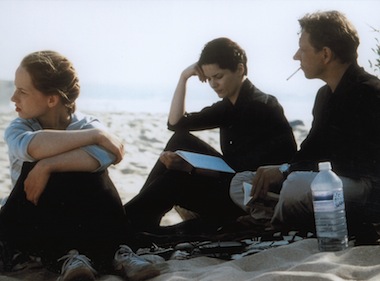 Petzold’s debut feature, co-written with the filmmaker Harun Farocki, who was his lecturer at the Berlin Film and TV Academy, already shows a unique style and content, which would make him into one of the few German directors whose films have become cult classics outside Germany. Petzold avoids the ‘thesis’ approach of many of his compatriots, but tells a story from a personal viewpoint, leaving the audience guessing ’til the end.

THE STATE I AM IN could easily have been another dogmatic and sterile film about the anarchists of the Baader-Meinhof group; instead, Petzold shows a teenager struggling with adolescence, living with her parents, who are on the run from the police. Jeanne (Hummer) would love to be an ordinary teenager, but when we meet her for the first time in a costal resort in Portugal (Cascais), she is under constant surveillance from her parents, who are afraid that their daughter might accidentally blow their own cover. When Jeanne meets Hamburger, Heinrich (Bingul), in a café near the beach, she starts to fall in love with him – and his stories. Heinrich tells her that his mother committed suicide in the swimming pool of a villa, which he and his wealthy father abandon after her death. Jeanne’s parents Clara (Auer) and Hans (Müller) are planning to go to Brazil, to start a new life. But thieves rob their apartment and the key to a locker at the train station, where the money for their emigration is stored. The family travels to Hamburg to raise the money for flights to Brazil, meeting ex-members of their gang, who have since made their peace with the authorities. Jeanne leads her parents to Heinrich’s abandoned villa, where they take up resident. But Jeanne meets Heinrich again, by accident, living in a local hostel. Whilst they sees each other secretly, her parents plan to rob a bank. When her father is injured in a shootout, and Clara kills a guard, Jeanne finally tells Heinrich of her predicament, setting the cat amongst the pigeons in a tragic denoument.

In this moody thriller, Petzold engages in the state of mind of his protagonists, delivering a good analysis of the “Red Army Front”. The film successfully unravels an important part of West German history after WWII. Instead of taking sides, Petzold lets the audience discover the parallels between the make-believe world of Clara and Hans on one side of the narrative, and Heinrich on the other: both sides dream of a life in a different reality. Jeanne is caught between these two, unable to make sense of her parent’s bourgeois demands for a good education, and their status as criminals.

One of the most significant scenes of the film is a meeting between Jeanne’s parents and another ex-member of their group, where Jeanne is used as a go-between, carrying a copy of “Moby Dick” (Andreas Baader’s code name in the RAF was ‘Captain Ahab’) as a sign of identification. Here we see the dilemma of the members of the “Red Army Front” of the first and second generation, who usually came from middle class background and were well read’ believing in cultural values. These traits of their upbringing were fatal in their assessment of the political situation: they believed in the fictional world of books and films, and not in realistic power politics. It was a near psychotic delusion, to believe that a handful of middle-class dropouts could overturn a state security system with far superior manpower and technology.

The RAF’s argument – that Germany was still ruled by leading members of the Nazi Party – was absolute valid: Heinrich Erhardt, chancellor of West Germany from 1963-1966, was a member of the SS-Finance Organisation, his direct superior, Ohlendorf, was sentenced to death in Nuremberg; and Erhardt’s successor, Kiesinger, was a high-ranking member of Goebbel’s propaganda ministry – not a mention the huge number of civil servants and policemen of the old regime still in their posts – like the majority of the Berlin police force who beat up demonstrators in West Berlin on a regular basis, having served beforehand in the murderous repression of the Warsaw Ghetto uprising..

But the RAF (and their sympathizers) did not acknowledge that this political status quo could only exist with the consent of the huge majority of the West German population, well-known for hiding war criminals for decades after WWII. The RAF’s failure was to see themselves as city-guerillas, supported by the majority of the population, whilst in reality they were a romantic sprinkling, turning to violence and being met by a much better prepared state force which crushed them to the applause of the huge majority. They left realistic opponents of the West German post-war system in a thankless position where they could defend the deeds of either side. Whilst the RAF’s violence was nothing compared with that of Nazism, the anarchists legitimised those in power in West Germany, who could rightly claim they upheld the peace against the ‘left wing’ perpetrators.

Apart from offering an entry into a wider political discussion there are some solid performances, particularly outstanding is Hummer’s Jeanne as a victim of parental delusions and neglect. Hans Fromm’s camera follows the trio, his shady visuals mirroring their paranoid view of the world, where everything could turn violently against them at any moment. Petzold’s debut is a convincing thriller with a cause, showing the sad state of mind of self-declared ‘liberators’ in this moving German-noir. AS

AVAILABLE ON AMAZON | along with BARBARA AND PHOENIX, AND JERICHOW