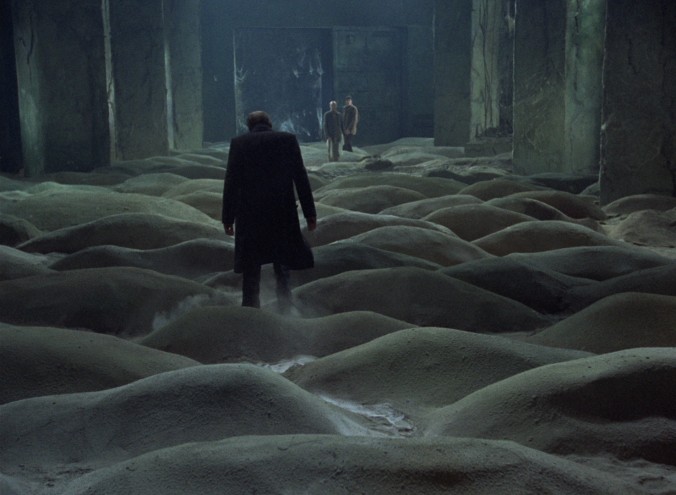 STALKER based on the novel ‘Roadside Picnic’ by Arkadi and Boris Strugatsky, was Andrej Tarkovsky’s fifth feature and imagines a mystical and enigmatic journey. Open to all kinds of interpretation, the production itself and the aftermath was fraught with strange incidents and tragic deaths. After filming the exterior scenes for over a year, it emerged that Tarkovsky wanted to re-shoot with a new cameraman Alexander Knyazhinsky, after falling out with his original DoP Gregory Rerbery (Mirror). But the controversy didn’t end there. It was also rumoured that much of the footage was actually lost. This was due to processing problems in the Moscow film laboratories who were not used to dealing with Kodak products. The shoot itself took place near Tallinn, Estonia (then part of the USSR), in a chemical plant that pumped poisonous liquids into the air that could well have contributed to the death of the actor Anatoli Solonitsyn from lung cancer. Tarkovsky himself died only seven years later in Paris, aged 54, of the same bronchial cancer as his wife Larisa Tarkovskaya – twelve years later.

STALKER has much in common with Solaris and although both portray a dystopian version of the future, STALKER is not an apocalyptic one. The camera introduces us to a room where a family of three are lying on a bed: Stalker (Kaidanovski), his wife (Fejndlik) and his legless daughter Martha (Abramova). This takes the form of a tableau vivant where the figures move. Stalker is a scout who leads visitors into ’The Zone’, an eerie moonscape of horror and beauty where something otherworldly has clearly happened. This could have been the result of a meteor, or the presence of Aliens, or simply natural forces requiring it to be cordoned off by police and soldiers. Whilst his wife does not want him to return to the Zone, Stalker is fascinated by the area and drawn involuntarily to it. His next two ‘clients’ are a writer (Solonitsyn) and a scientist (Grinko). They set out from a hostelry, and are nearly gunned down by police. By the time they enter the Zone, the black-and-white images are replaced by colour, but only for trees, fields and flowers, in contrast to the litter of an industrial wasteland ruining Nature’s beauty.

The trio’s odyssey could be termed a “journey of souls”, because Tarkovsky makes no difference between the inner and outer world of his protagonists. Whilst Stalker is obsessed by individuality, the Zone being the only reflection for his yearning for spiritual purity, the writer is full of nihilism and sees mankind from a cynical perspective. He has lost faith in himself, in his writings and is depressed because of his writer’s block. The scientist only wants to destroy what they are all looking for: A room, where the darkest wishes come true. Stalker and the writer are able to overpower the scientist, who wanted to make sure, that nobody could use the ‘Room of wishes’ for evil purposes. None of the three will enter the room after all. When they return, they seem to have not changed much: the three are the archetypes of the 20th century: the nihilist, the man of science and Stalker, the (lost) individualist.

At the end, Stalker’s wife raises a the question:“How would a life without any suffering work out? A life without suffering would also be one without happiness and hope.” This is as close as we come to an answer: an existence without highs or lows, based on technology, materialism or belief in scientific progress is doomed to an utter mediocrity. To be unreasonable, is to be alive. The myriad symbols of STALKER leave just one interpretation given by Tarkovsky himself: “In the end, everything can be reduced to one single element, which is all a person can count upon in his existence: the capacity to love”.