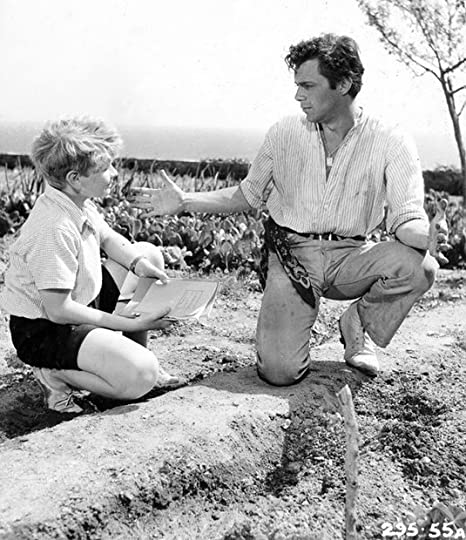 By the mid 1950s Dirk Bogarde was already Britain’s most popular star and a heartthrob in his successful role as Dr Simon Sparrow in smash hit Doctor in the House (1954). He cuts another confident dash as the sultry Spanish gardener who forms a close bond with a boy in need of a sympathetic father figure, in this rather good early drama from English director Philip Leacock.

This subtle study of male personalities sees three men caught in a toxic triangle: The boy’s father is a minor English diplomat who has been passed up for promotion and abandoned by his wife, and Michael Hordern expresses his failure poignantly in s buttoned up masculine turn, seething with suppressed hurt and jealously as Harrington Brande, who continually takes his resentment out out on his son Nicholas (Whiteley), who is ironically his main emotional support, pushing him away in the process. The boy gradually becomes obsessed with the free-spirited gardener Jose hired to tend the grounds of their lavish diplomatic villa in Catalunya.

Set in the lush countryside near Barcelona, John Veale’s lively score adds an upbeat vibe to the troubled dynamic between the men; Bogarde’s sympathetic gardener offering comfort to the young Nicholas when the male housekeeper (a sly and rather sinister Cyril Cusack) gets drunk and threatens him after a fishing trip. Cusack’s Garcia is pivotal to the plot line that gives the film its gripping finale.

Based on AJ Cronin’s novel, this is the kind of low-key character study that Leacock excelled at, and it showcases Bogarde’s good looks and charismatic talents to striking affect. Geoffrey Keen offers solid advice as Dr Harvey, convincing Brande of the error of his ways in disciplining the boy rather than reining back his own feelings of jealousy and hatred for another man. Was there another fear at play here, one wonders? Jon Whitely is impressive in his debut role which he turns in with maturity and insight surprising for such a young actor, and Maureen Swanson sizzles gracefully in an underwritten role as Jose’s love interest. But this is Hordern’s film, and he is quietly impressive as the English diplomat whose ego had been bruised by disappointment and rejection in a finely-tuned portrait of desperation. MT