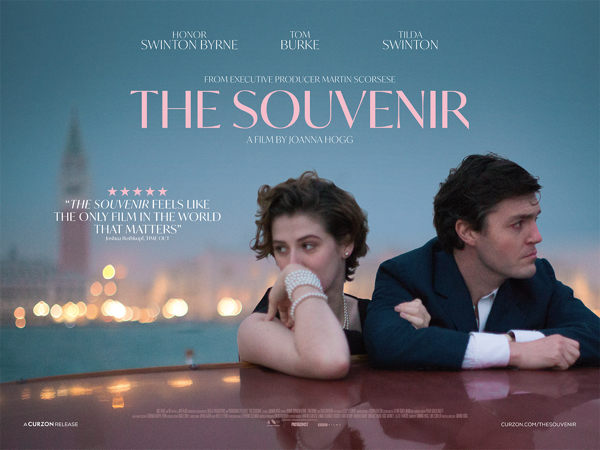 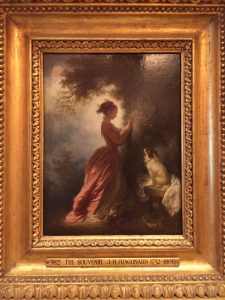 Joanna Hogg is the only living female filmmaker who portrays a particular English contemporary milieu. Usually creative, invariably white and well-educated, these characters are liberal in outlook and mostly live in London. With such unique sensibilities and vision she is able to understand and convey as certain type of middle class angst (borne out of having to do the right thing, irrespective of personal choice). She did it gracefully in Unrelated (2007), Archipelago (2010) and Exhibition (2013), And she does it peerlessly again here with The Souvenir, a nuanced and delicately drawn story of addiction and strained relationships that very much echoes its time and place: the late 1980s – although it was inspired and takes its name from  Fragonard’s painting, a motif that runs through the film.

This all revolves around Julie, a dark horse and an English rose (earnestly played by Tilda Swinton’s daughter Honour Swinton Byrne) who is tentatively making a career for herself in film school while awkwardly becoming involved with her first proper boyfriend. Clearly she is talented but lacks real confidence – both in love and in life – largely due to a repressed English background. Although her mother is loving and wonderful there are clear hints that certain things were simply not discussed at home, but still waters nevertheless run deep on the feelings front. Hogg relies on an improvisational approach, stripping away clichés to distill the emotional content of each scene, often with minimal dialogue and relying on body language and atmosphere.

Women of that era will remember the silent voids during a date where the silence spoke volumes, often marking the beginning or the end of another tortuous romance with a man who could not express himself, and chose merely to back away and then reappear with pleadings and desperate often incoherent bids to meet again. Often covering this with bluster and demeaning put-downs, Tom Burke gives a priceless performance as Anthony, a man whose emotional range does Attila the Hun a disservice when it comes to affairs of the heart. “You’re a freak. You’ll always be last,” he tells Julie. And Hogg is clearly mining these fraught memories too with this doomed romantic pairing.

Julie presses on undeterred, internalising her feelings, and clearly drawn to public school Anthony through some atavistic genetic link. Because he purports to be ‘from the right background’ – he is clearly approved of by her parents – the very mild-mannered Tilda and her on screen husband.William. One of of the best scenes sees Richard Ayoade playing a ‘cutting edge’ filmmaker and deftly spilling the beans that Anthony is a heroin addict. “I find doing heroin to be mainstream behaviour,” he jokes to a rather bewildered Julie. And we discover she’s funding his habit with donations gleaned from her mother, who does seem alarmed at Julie’s rising expenditure for film-school supplies. In a caddish moment Anthony even roughs up Julie’s Notting Hill flat, faking a burglary to raise funds for his addiction. Drugs make psychopaths and monsters of addicts. And Julie is a victim too, of love. But she keeps a stiff upper lip. Endearing scenes with her parents are a triumph in their candid intimacy, and make us reflect on the placid generosity of the British.

Julie and Anthony share a deceptively satisfying sex life behind closed doors, shown in 16mm-styled footage that follows them on an impromptu romantic break to Venice, funded unflinchingly by Julie. She epitomises the female lack of confidence of that era, back-footed by her desire to appear cool and inclusive when pitching for a film school project, and desperate to fit in with the others. She emerges lonely and rather misunderstood, though keen to do the right thing. And the comforting presence of her concerned on screen mother resonates throughout, you stifle a snigger when she utters the words: “Anthony was taken ill in the Wallace Collection”.

Joanna Hogg will soon embark on the second part of this semi-biopic affair with Robert Pattinson joining the cast. The story of a young filmmaker finally making her way is something to look forward to. MT