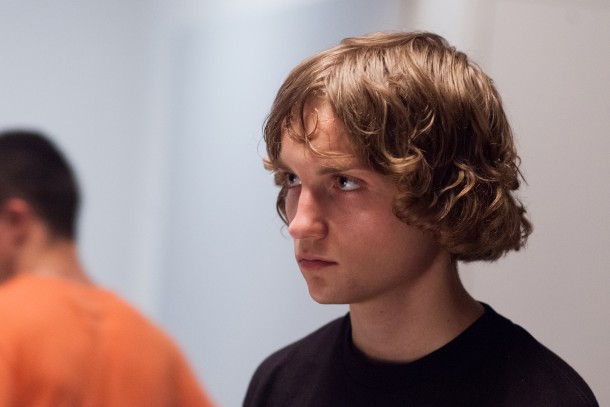 The Smell of Us (2014) Seville Film Festival

100min  French with subtitles  US  Drama

Nearly two decades after Larry Clark’s breakout success Kids stunned Cannes audiences, his latest cinema vérité piece THE SMELL OF US  premiered at Venice 2014. As the voyeuristic camera trawls through a collage of urban life in Paris: you might expect beguiling glances and sexy women sashaying through chic boulevards. Not here. Instead we see bodies urinating, rutting furiously and giving oral sex: hard-ons, roll-ups and tattoos. Gradually through this ‘ordure’ of sweating humanity emerges a narrative that recalls last year’s Venice outing Eastern Boys. Far nastier and more graphic but equally compelling, it focuses on a circle of French ‘skate’ kids from troubled but reasonably affluent backgrounds. Idle and ‘on the make’, rather than desperate for food and shelter, they meet up to get stoned and hook-up online for paid sex.

Clark’s film was inspired by the French youth he met while in Cannes in ’95. Gradually getting to know them and their parents, he decided to shoot THE SMELL OF US.  It makes grim and rather disquieting viewing. So disenchanted and uninspired are these characters that ambition and careers have so far failed to inspire. If, indeed, they wanted to engage in meaningful jobs, the ability to earn easy money has spoilt them and they now face a future of despair.  For the central character Math (Lucas Ionesco), a pretty boy in his teens, it’s easier to be rodgered senseless up the arse by a rich man, than pass and exam and attempt to get a job, even if it renders you catatonic with boredom. The quick route to decent money has come through an internet cable. These are hateful creatures but they are also mindless and pitiful.  It appears their parents are the root of their misguided ennui. These are the spawn of broken marriages and mothers who have robbed them of their innocence through inappropriate sexual advances.

But Larry Clark seems to despise his own generation even more than these sad youngsters.  There’s a streak of ageism here: that older people suddenly becomes sexless and have to withdraw just because they lose their physical attractiveness seems a harsh indictment of today’s society. In their desire for sexual gratification, they too have gone online for empty experiences. The men fuck these young bodies furiously, the women stroke, admire and gloat on their young looks. The old characters here get little pity. We’ve shot through, race, culture and mysogyny and it now appears that ‘ageism’ is the last taboo. Clark has a dim view of these parents, and particularly Math’s mother who tries demands sexual gratification from him in one scene that proves difficult to watch, for moral reasons. Youth and beauty is always going to be a better sell than wrinkled skin and sagging arms, despite a rather attractive grey-haired woman who simply wants to watch and caress her young lover.

Clark weaves a vibrant tapestry of ugliness and despair guilded with occasional flourishes of welcome allure: a fashion defilé in the gardens of a Parisian villa, an elegant woman carrying a tray of champagne up a flight of stairs.  A shame that it’s a prelude to violent death. MT

THE SMELL OF US PREMIERES AT VENICE FILM FESTIVAL FROM 27 AUGUST UNTIL 6 SEPTEMBER. FOLLOW OUR COVERAGE UNDER THE FESTIVAL DROP-DOWN MENU