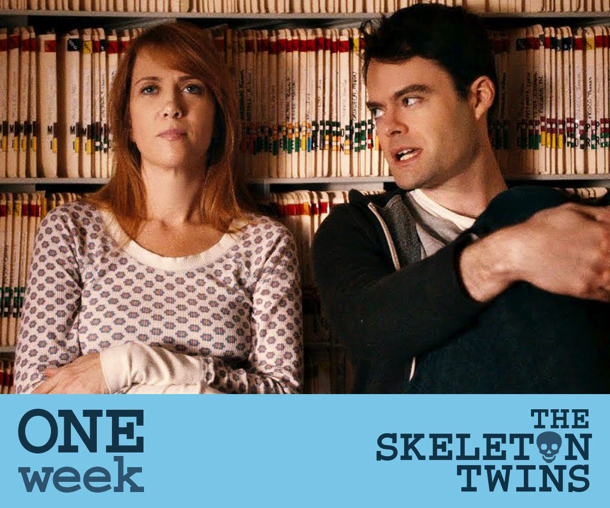 Comedic duo Kristen Wiig and Bill Hader originally found fame with ‘Saturday Night Live’. In this darkly humorous character study they star as estranged twins who are brought back together through fate. Milo (Hader) is recovering from a suicide attempt in LA after a break-up with his male partner and Maggie (Wiig) is trying to make her marriage to work, despite serious misgivings on the sexual front. So Maggie offers Milo a shoulder to cry on and her spare room in upstate New York.

After this rather tragic opening, writer/director Craig Johnson cleverly crafts an amusing storyline, teasing out the sibling’s dysfunction past to show how it inevitably impacts on their life and relationships in the present. And while Maggie’s husband Lance (Luke Wilson) is stable and honest ‘marriage material;  she is forced to face their sad lack of sexual chemistry when she falls for her scuba diving instructor, Billy (Boyd Holbrook), and sparks fly. Milo, meanwhile, is trapped in an sexual obsession with a figure from his childhood (Ty Burrell).

Johnson skilfully evokes both the intense rivalry and the visceral closeness of the siblings with some laugh-out-loud moments and even a hilarious rendition of “Nothing’s Gonna Stop Us Now” and there is a brilliant vignette with their mother (Joanna Gleason) which perfectly portrays the reasons for their failure to find suitable relationships. There’s a great deal to be enjoyed is this watchable drama with its perceptive charm and superb performances from the leads. And even though Maggie’s dorky husband is unappealing on many levels, Luke Wilson manages to show us why Maggie, and women like her, end up with unsatisfactory partners when their biological clocks go off with the vital wake-up call that never goes off for men. So nothing ground-breaking here, but Hader and Wiig make The Skeleleton Twins solid and enjoyable entertainment for an easy Saturday night at the pictures. MT