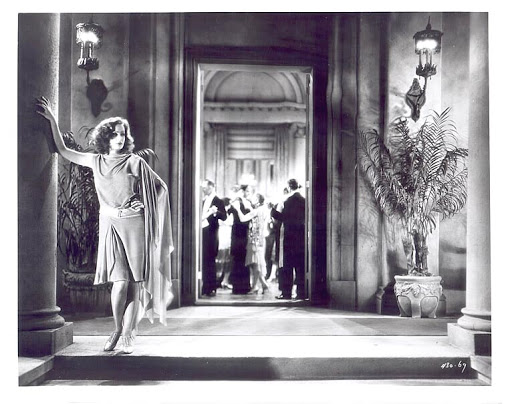 The second of three silent features featuring Garbo released in 1929 while MGM scratched its head pondering how they were to promote her as an attraction in talkies; The Single Standard was also her second feature in a row pairing her with fellow Swede Nils Asther.

Garbo is improbably introduced as All-American party girl Arden Stuart, presumably loaded, but of whose life and means prior to the wild party in an enormous Art Deco mansion with which the film begins we learn nothing. Despite the provocative title – vaguely advanced at one point as some sort of feminist statement about the social constraints placed upon women – The Single Standard swiftly turns into a standard Garbo vehicle in which after flirting with modernity in the form of motor rides at seventy m.p.h. and a dalliance with pugilist turned artist Asther she ultimately embraces respectability and parenthood with John Mack Brown for the sake of her cute little curly-haired moppet of a son.

The name of director John S. Robertson isn’t much recalled today, even by connoisseurs of silent cinema (unless they’re also connoisseurs of horror cinema, since he directed the John Barrymore version of Dr Jekyll and Mr Hyde in 1920), but he does a good job here with the assistance of high-priced Metro talent like cameraman Oliver Marsh, art director Cedric Gibbons, costume designer Adrian and whoever was responsible for Garbo’s various hairstyles which subtly changed as the film ran its course to reflect her developing emotional state. @Richard Chatten