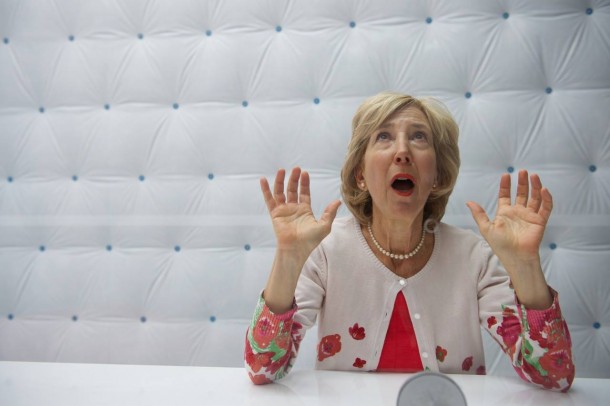 Deep in the countryside, three ramblers cross paths with a strange and unworldly encounter in William Eubank’s slick indie that starts as an compelling weird Sci-FI mystery thriller but gradually joins the highway to mainstream city, veering off the path of arthouse intrigue.

Nic and Jonah (Brenton Thwaites and Beau Knapp) are MIT students who seem to be involved in a computer virus dispute with someone called Nomad. When Nic agrees to take his girlfriend Haley (Olivia Cooke) back to University across country, Jonah goes to share the driving because Nic seems to be on crutches. On their way they pick up intelligence that may lead them to Nomad’s whereabouts. Against their better judgement, they take a detour into the desert.

This takes them through some glorious widescreen visuals and a retro vibe as we cruise zen-like along in the fields  of big mountain country, enjoying David Lanzenberg’s gorgeous cinematography until arriving at nightfall at an abandoned shack in the middle of nowhere. And this is where proceedings go pear-shaped as the mood becomes edgy and sinister. Haley is abducted by an alien-like being before and they all space out and loses control. Nic gradually comes to his senses in a space-age hospital staffed by men in white overalls. He can’t feel his legs.

The doctor in charge of Nic is Wallace Damon (Laurence Fishburne). Apparently Nic and his friends came across an “extraterrestrial biological entity,” and it is vital for Nic to remain within the confines of the hospital for his own safety. But Nic, in a performance of palpable paranoia (by Thwaites), is not convinced and desperately tries to escape the sinister surroundings and endless white corridors and weird doctors. In vain. Then after an eerie dreamlike sequence of events where he is unable to move and is pursued by a very spooky-looking Fishburne as the doctor, Nic takes charge and breaks away from the hospital along a series of narrow tunnels and finally to freedom. But his troubles are far from over. Despite a delightfully off the wall turn from Lin Shaye as a religious nutter, this Sci-fi mystery fails to deliver the satisfying denouement that we’re hoping for as our interest gradually wanes in the last half hour. It’s watchable and wacky all the same and Nima Fakhrara’s ethereal soundtrack lends a surreal atmosphere.  MT