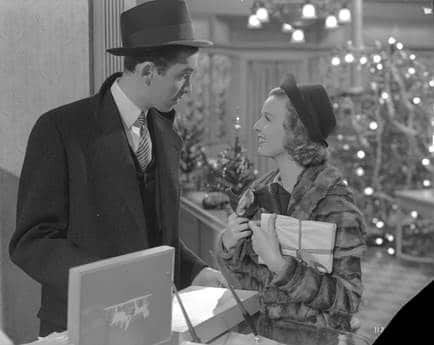 “The American movie-going public has the mind of a 12-year old child; it must have life as it isn’t. (Ernst Lubitsch)”

Of all Hollywood’s immigrant filmmakers, German born Ernst Lubitsch (1892-1947) was the most successful in serving his new audience, adapting well to the change-over from silent to sound. The “Lubitsch touch” became a trademark, success was guaranteed, he reeled off classic Hollywood comedies like Trouble in Paradise, Ninotchka or To Be or Not To Be. He would have churned out even more, but for a heart condition which slowed him down in final years of his life, succumbing to it whilst shooting That Lady in Ermine.

The Shop Around the Corner is based on the play ‘Parfumerie’ by Miklos Laszlo, adapted for the screen by Lubitsch regular Samson Raphaelson (Heaven Can Wait), with some uncredited work by Ben Hecht. Whereas most of his comedies played out in world of the idle rich, The Shop is set in a working environment, taking him back to his father’s tailoring business where he did the accounts as he took his first steps as a stage actor.

The setting is a leather-goods and novelty shop in Budapest (via Hollywood), run by the imperious Hugo Matuschek (Morgan), whose bark is worse than his bite. His deputy is Alfred Kralik (Stewart), a likeable but air-headed man and the day unfolds amid bickering with new shop assistant Klara Novak (Sullavan). Little do they know that after office hours they are falling in love through the post as each other’s anonymous pen pal.

When the great day arrives for the ‘lovers’ first meeting in a local cafe, Mr. Matuschek orders his staff to stay late for an inventory, and then later fires Kralik suspecting him of having an affair with his wife. The real culprit will be soon be revealed. Off to his meeting Kralik looks through the window and, to his horror, sees Klara reading Tolstoi at the cafe table. He enters, talks to her, but does not reveal his true identity. Meanwhile, Mr. Matuschek is saved from suicide by the apprentice Pepi (Tray) who is promoted, as is Kralik who then becomes the manager.

The film positively glows in fluffy fairy-tale black-and white by William Daniels (Cat On A Hot Tin Roof), Lubitsch again ducks the censors by talking sex, but only showing a perfunctionary final kiss. The director might have been inspired by the relationship of Maurice Chevalier and Jeannette McDonald who played love birds in numerous features, despite oathing each other off screen. Lubitsch directed McDonald’s debut (and also his first sound feature) alongside Chevalier in The Love Parade (1929). Often remade with disappointing results – with Nora Ephron’s You’ve Got Mail (1998) the latest offering, Lubitsch’s The Shop is from another universe: A true classic.AS