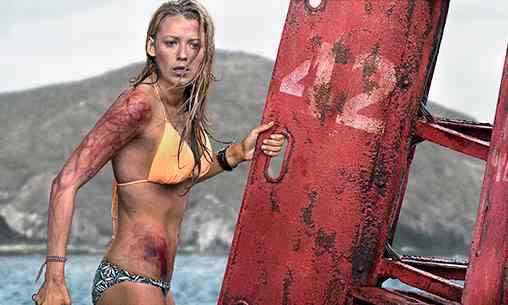 Billed as the most terrifying shark thriller since Jaws, THE SHALLOWS doesn’t quite push the boat out in the same way as Steven Spielburg’s seminal seventies shocker, but for a slick 87 minutes it serves up a shot of adrenaline that will see you through the summer’s torpid cinema selection. Certainly filmic and well-constructed with some taut and tricky action scenes THE SHALLOWS makes great use of its tropical Australian seascapes and Blake Lively’s considerable charms as a stunning actor and capable action woman.

Catalan director Jaume Collet-Serra is known for a string of decent but untroubling thrillers, amongst them Unknown and Orphan, and this glossy bikini-buster is a welcome addition to his workmanlike repertoire, it slips down easily offering light entertainment unlikely to take the enjoyment out of your relaxing holiday swim in the sea; whether it be in the Med or a more exotic location.

Essentially a one-hander THE SHALLOWS is carried through on Lively’s perfectly formed shoulders as Nancy. a Mermaid-defyingly devastating surfing heroine who exudes a sensual, sweet-smiling vulnerability as a dropout medical student who is taking time out to kick back after a tough year. A backstory as tight as her buttocks contextualises her life: Mum also loved the beach but has recently died and she is close to her sister and father back home on the ranch in Galveston Texas. She arrives on a remote palm-fringed beach courtesy of her hungover companion Carlos and flirts with a bevvy of surfing buddies on her way to ‘blue hell’ (the film’s Spanish title is Infierno Azul) after tripping through the shallows in her neoprene wetsuit and gold jewellery (which later comes in handy when surturing her thigh). The rest is pretty much formulaic but tenderly told: nasty shark threatens, mermaid is injured but avails herself of her medical training to add spice to this compulsive survival against the odds narrative that incorporates a Friends of the Earth subtext.  Ultimately THE SHALLOWS is less of a  shark shocker and more a guide to surviving against the odds by using our instincts in harnessing nature’s protective forces. Amid a flurry of wetsuits, blonde tousled locks, twisted limbs, sharks teeth and gulls wings, Anthony Jaswinski somehow crafts a convincing storyline to keep us amused for the duration and although the finale comes as no surprise it’s somehow enjoyable getting there. MT

THE SHALLOWS IS ON GENEAL RELEASE IN AUGUST 2016