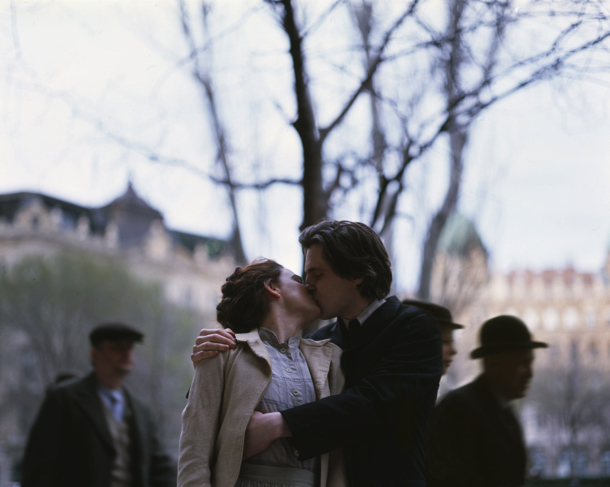 Pernilla August fails to convey the passion of her unrequited lovers in this Swedish answer to Flaubert’s Madame Bovary.

Adapted by Lone Scherfig from the 1912 novel by Hjalmar Soderberg, A SERIOUS GAME is another costume melodrama exploring the potent chemistry of sexual desire and longing in a story of sexual obsession. The couple in question, Arvid Stjarnblom (Sverrir Gudnason) and Lydia Stille (Karin Franz Korlof), never quite captivate our attention throughout this initially steamy bodice-ripper but August’s efforts are to laudable in her second feature.

Arvid is a young writer and proofreader for Stockholm’s main newspaper when he meets the daughter of one of Sweden’s most noted landscape painters, Anders Stille (Goran Ragnerstam): “I painted a completely blue canvas once, it’s in the National Gallery”.

This is the third screen adaptation of the story that follows the amorous exploits of starstruck lovers whose enduring ardour for each other is fated never to end in marriage, de-stabilising and upsetting everyone in their wake. Initially engaging, it eventually becomes tedious (along with its monotonous score) but offers a fascinating snapshot of early 20th century life in Swedish publishing and literary circles.

The couple first set eyes on each other at Lydia’s father’s summer cabin on an island near Stockholm. Lydia offering her beau one of her father’s paintings inscribed with the words: “Away. I long to get away.” Sadly Papa is to die leaving her without an inheritance and, without any means of supporting herself Lydia is forced to marry the wealthy, older Roslin (Sven Nordin). The lovers meet again years later when they are both married parents: Arvid has settled for an attractive and wealthy blond (gracefully played by Liv Moines).

This rather drably photographed romantic drama then goes backward and forward as the two make each other, and everyone else, unhappy with their illicit affair; hot-headed Lydia doesn’t quite think things through, deciding to leave her husband to return to the cabin and a rather passive Arvid, who shilly shallys all the way home. With neither character convincing beyond their vapid victim status, the narrative slowly unravels to a disappointing conclusion.

The more interesting characters here are seriously underwritten: Michael Nyqvist, as the charismatic newspaper publisher and Mikkel Boe Folsgaard (A Royal Affair) as the much maligned Lidner, the paper’s froeign correspondent, who Lydia truculently casts aside.

A SERIOUS GAME is indeed serious and rather depressing, the only fire coming from a initial spark of sexual ardour rapidly extinguished by a narrative whose central characters fails to exude any appeal for the audience. They can be forgiven, in part, for being young and aimless, but youth alone does not make for exciting viewing. MT