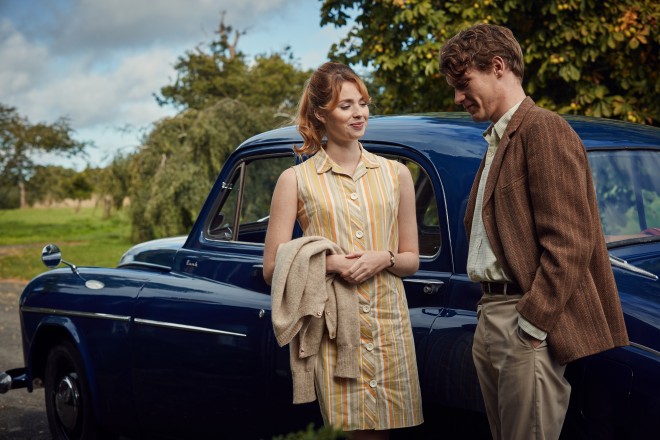 The past is how we choose to remember it. Sometimes significant events are forgotten or edited out. This is the premise of Julian Barnes’ 2011 Booker Prize winning novella that explores the psyche of a quintessential Englishman and his selective memories of youth.

Thoughtfully adapted for the screen by Nick Payne, THE SENSE OF AN ENDING is a dispassionate film in many ways, not least because the characters are so repellent, thornily portrayed by the subtle support trio of Rampling, Walter and Dockery with a nuanced Jim Broadbent as Tony Webster, the main focus in this amusing drama from Indian director Ritesh Batra who is so clever at making this feel so classically and insightfully British. The story is certainly gripping and keeps us invested in Barnes’ intricate storytelling but the flashbacks, so vital to informing the plot, are actually key to understanding the main character’s motivations and there is a strand of sardonic humour that makes this another brilliant observation of emotional suppression that often follows a false start in youth. The 1960s scenes are teasingly repressive and so representative of how damaging an unsatisfactory first relationship can be, particularly for sensitive souls such as young Tony.

The story revolves around Tony Webster, divorced and busily keeping life at bay as the proprietor of a small speciality camera shop in leafy North London. This unfruitful foray into passionate love during his college years has sent him scurrying for cover, and after coasting through his marriage to QC Margaret (a brilliant Walter), which produced a (now pregnant) lesbian daughter Susie (Dockery), he has managed to avoid emotional entanglements of any kind. And although he enjoys Margaret’s caustic company over dinner he still doesn’t get why their marriage is over.

But the past returns to bite Tony when he is left a strange bequest in a will, encouraging him to track down his enigmatic first love Veronica Ford who is still as evasive as ever in responding to his requests. Their eventual meeting drudges up an unfortunate episode that Tony had chosen to forget and reveals how the Young Tony (Howle) fell for the ambivalent Veronica (Mavor) during an awkward weekend at her family home in rural England, where he is entranced by Veronica’s mother Sarah (played by a winsomely suggestive Emily Mortimer).

Tony discovers subsequently that Veronica has taken up with his maverick friend Adrian (Alvyn), who fancies himself as a cool Camus-quoiting intellectual (later committing suicide). Disillusioned by love and bewildered by his feelings for Veronica, Tony is forced to confront a past that offers the key to his future.

According to Margaret and Susie, Tony has become an emotional avoidant dinosaur, a ‘curmudgeon’ who regards the modern world with disappointment and disdain. Having successfully cleansed his memory of any wrongdoing regarding Veronica – and subsequently Margaret – his self-glorification shows him up to be exactly the same person he was as a young man: an arrogant but misunderstood bystander, proud to have chosen a life in his shell.

Suicide, sexual repression and unrequited love are themes of incendiary dramatic potential, and this film, with its thoughtful musical choices, trades passion for emotional restraint and typical English poignance. Clearly, Tony has lost contact with his feelings and shut the door on romance without even realising the effect this has had on his wife and family. But his emotional day of reckoning will strangely be the making of him. MT