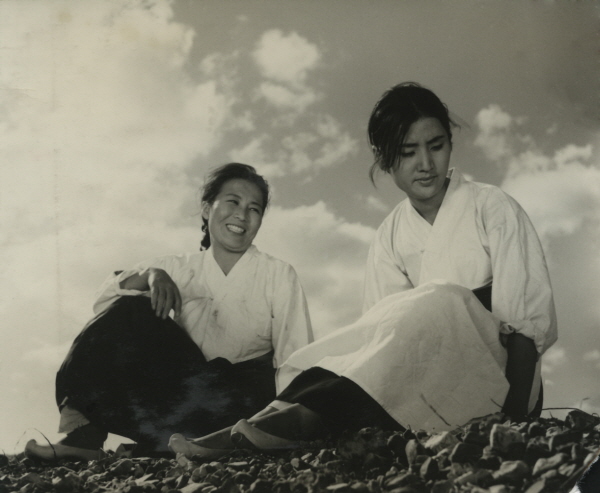 The Seashore Village was the thirty-forth film of prolific director Kim Soo-yong, who made 109 features between 1958 and 1999. Now in his nineties the director still travels the world to present his films giving Seashore a feisty send off to the delighted audience at a lively Q&A in Regents Park Cinema (and bemoaning the absence of his two main actors) where his film opened the London Korean Film-Festival 2019.

Based on the novel by fellow director Bae Chang-ho and Executive produced by Ho Heyon-chan of Last Autumn fame, Seashore Village is a mournful melodrama about doomed love, but also a celebration of female solidarity amid hostile working conditions which makes today’s gig economy look like a walk in the park.

On a remote island, beautiful young pearl fisher Hae-soon (Ko Eun-ah-I) has just got married. But her husband is to become one of many victims of the ocean that both gives and takes away the villagers lives. And when he does not return from a fishing trip, Hae-soon joins the fate of many of the island’s women, widowhood. Sadly custom prevents them from marrying again so she must live with her mother-in-law Hwang Jung-soon.

Many of them have resigned themselves to a lonely life, others have chosen lesbian relationships. But Hae is too beautiful to sink into oblivion and is soon getting unwelcome attention from the local men. One is Sang-soo (Shin Yong-kyun), a rootless coalminer, who lives near the village. Hae is annoyed by Sang-soo, but eventually succumbs to his persistence. But he cannot keep their affair secret, and when he starts boasting about his luck, the couple have to leave the village, with the help of Hwang Jung-soon, Hae’s mother in law. But their relationship is doomed to fail. Everywhere the go, men just cannot keep their hands off the beautiful young woman in the dark and brutal depiction of the male in Korean society

Resplendent in black and white The Seashore Village has a strong documentary character yet retains its poetic sensibilities, the widescreen images of DoP Chun-Jo myong reminding us very much of Visconti’s La Terra Trema and Flaherty’s cult classic Man of Aran. AS