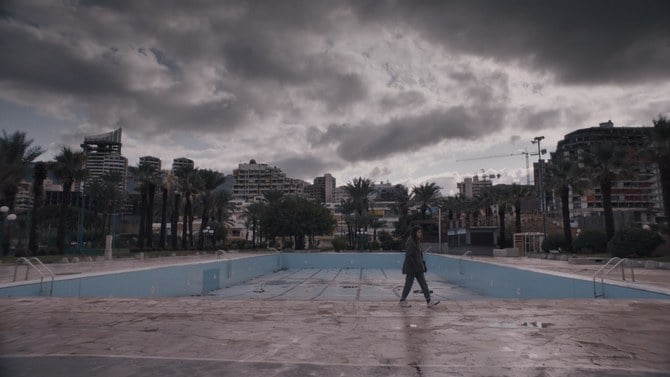 The Sea Ahead is a rather languid feature debut for Lebanese writer/director Ely Dagher opts for moody enigma at the expense of a tangible plot in an enigmatic narrative that somehow suits its theme of directionless youth.

Jana (Manal Issa) is back in a wintery Beirut to find life has changed in the Mediterranean capital – her father has even started doing the washing up in support of female emancipation. But Jana seems sullen at the prospect of being home again and somehow resentful of her middle-class parents. Trying to maintain a low profile while she  finds her feet again is impossible with her mother alerting the whole neighbourhood of her return from studying in Paris.

Beirut positively glows with the promise of new life, the city’s regeneration well on the way, with burgeoning construction stretching along the coastline – despite the ravages of the pandemic- but Jana is not convinced. Her years in Paris have broadened her horizons but not just culturally, leaving her disenchanted, coasting through her days not keen to work despite a potential job offer from family friend Hassan.

Another friend is getting married – word has it she’s already pregnant – and Jana’s father tuts away in dismay at the aimlessness of today’s younger generation:  “we fought and suffered” he claims, presumably referring to the 1982 war with Israel.

Seeing her old boyfriend Adam (Roger Azar) is the only thing that puts a smile on Jana’s face and they spend lazy days in the lowly mechanic’s apartment eating falafel, staring at their phones and dancing to Middle Eastern disco music until things turn sour.

A fadoesque portrait that explores a well to do generation with too much freedom and too many choices that leaves the uninspiring central character aimlessly drifting and dissatisfied. The feature works along similar lines to The Worst Person in the World although it lacks the energy, dramatic heft and fully fleshed out central character of the Cannes-winning Norwegian title showing that aimlessness can also have a winning appeal of its own. MT