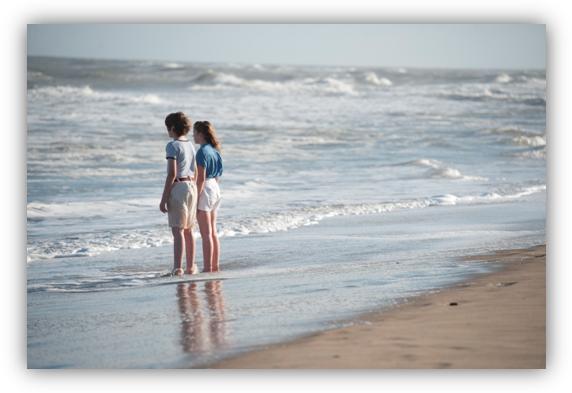 Stephen Brown directs John Bamville’s screen adaptation, loosely based on his novel about a bereaved man (Ciaran Hinds) who returns to the seaside resort of his childhood, to get over the death of his wife (Sinead Cusack). Often feeling as chilly as its Irish coastal setting, a stellar cast of British stalwarts keep this grim drama afloat on the shifting sands of Brown’s direction.

Charlotte Rampling is superb as Mrs Vavasoor, the restrained and elegant hostess at the seaside hotel who offers tea and empathy (“Solitude is a thing you learn…”).. while suffering the effects of delayed bereavement Max (Hinds) hits the bottle in a toxic mixture of grief, ennui and an adverse reaction to her geometric prints. Visions of his dying wife (a stoical Sinead Cusack) provide comfort but plunge him further into grief.

Even the idyllic sun-filtered flashbacks to his repressed fifties childhood feel unsettling and remote, as he remembers some kids he used to play with on the beach. His mind is filled with fantasies of their libidinous (and bisexual) mother Connie (McElhone) whose marriage to Rufus Sewell’s Carlo, although outwardly buoyant (think ‘Five Go Mad in Dorset’), appears to be have hit the rocks. A series of weird subplots involving Connie’s lesbian nanny and Carlo’s coquettish dalliance with a shopgirl feel gauche and implausible under Brown’s direction, and work much better on the page. And when the plot finally unravels, it’s so underwhelming we almost what to cry into our ginger beer.  MT